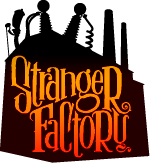 Mizna Wada is a Japan based illustrator who loves to make spooky things! About the title:
“aiueo” is the first five letters of the Japanese alphabet. “o” is included in the next word “of”  –>  “aiue of Horror”.  “aiue of Horror” is a self-published book about Hiragana (Japanese alphabet) by Mizna Wada. All the pieces featured in this exhibit were newly drawn drawings for the book. All pieces come framed.

Pop Surrealist painter and contemporary toy maker, Brandt Peters, presents a collection of new multi-media works born of a year of isolation, reflection, and wonder. Dozens of odd characters inspired by the parallel storylines of depression era animated characters combined with the growing anxiety of an uncertain future in an uncertain world. He combines vintage found objects with timeless avatars into hand made “toys” and assemblages that tell stories of resilience and optimism.

Brandt Peters emerged from the entertainment industry into an internationally recognized and accomplished fine artist, designer, and producer. Often known for his award winning toy designs, Peters is also a mixed media painter and story-teller who centers his work on character design and visual development. His work hearkens back to the earliest days of comics and animation, with a seeming simplicity that hides layers of intricate back story rooted in humor and a strong, empowering narrative voice. He is one of original founders of Circus Posterus and Stranger Factory gallery and pre-pandemic, worked as an Art Director for Meow Wolf.

Phil Noto is an Eisner nominated American painter, comic book/ concept artist who is known for his work on such titles as Black Widow, Jonah Hex, Uncanny X-Force, and most recently Star Wars (Chewbacca and Shattered Empire). After a 10 year career at Disney Feature Animation, he started to work full-time as an artist for Marvel, DC, Image Comics and Dark Horse, as well as time in gaming, working on such blockbuster hits such as Bioshock. Phil Noto has been a prominent featured artist at Stranger Factory since its opening in 2011.

Please contact us directly by email at strangerfactorysales@gmail.com if you would like to discuss a payment plan. Thank you!