Bunnies on Parade – an interview with Carisa Swenson and Amanda Louise Spayd!

Two of my favourite bunny making ladies in the world have finally done what I’ve been dying to see them to do – they’ve joined forces and created a bunny doll tour-de-force of exceptional floppy eared charm. Amanda Louise Spayd has been one of my favourite artists in the last couple years, and after discovering Carisa Swenson last year, and adding one of her gorgeously detailed dolls to my shelf, I’m starting to see the appeal in lagomorphs.

I got to ask Carisa and Amanda about their collections, and their collaboration, and other bunny related things, and they offered up a delightful romp through their shared influences and process!

CP: Tell us more about your fascination with bunnies! As a side note, I would be delighted if somehow one of you had a collection of creepy stuffed bunnies from your childhood.

Amanda: Not FROM childhood, but I do have a small collection of ratty old Easter bunnies, if you want a picture :P 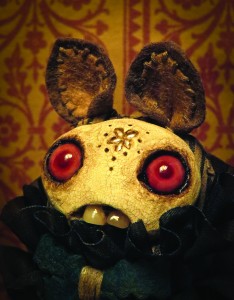 Carisa:
My obsession with rabbits started with Beatrix Potter’s enchanting stories and illustrations, then reinforced at my grandmother’s, as she lived in an area where rabbits would magically emerge at dusk. I could spend hours watching them.  Not only do I find hares and rabbits visually appealing, their feistiness and fleetness of foot (paws?) resonates with me.  “The Velveteen rabbit” was a favorite story of mine, but reading “Watership Down” and watching the animated film pretty much sealed it. I did have quite a collection of rabbit related trinkets and stuffed animals when young, but most are gone now. They seemed a natural subject to turn to when I began creating dolls.

Amanda:
It’s funny that I’m so smitten with bunnies, since I have never owned one.  But now that I think of it, I can definitely pinpoint some lapine influences early in my life – the first one being Watership Down. My mom was a teacher, and taught that book every year, so because it was around, I also read it pretty much every year. Also I was pretty obsessed with Jim Henson’s “Tale of the Bunny Picnic” when I was a kid. The rabbit thing sort of got revived in high school when I first saw Jan Svankmajer’s “Alice”….so, I guess i do have a fairly rabbit-heavy history. But in terms of rabbits in an artistic format, I think they’re really good as characters because so much of them can be used as expression. The bucky teeth, the ears – rabbits usually look frightened (I would too, if being someone’s dinner was always an imminent threat), and that nervousness is definitely something I use in my own work.  Also, let’s not skip over the fact that they are adorable. 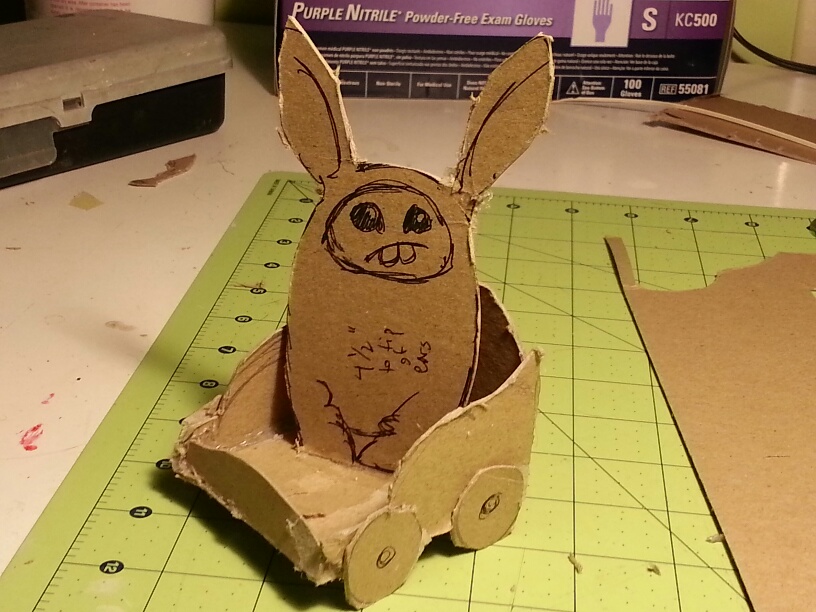 How did you evolve into doll making/soft sculpture as your primary medium? What other mediums do you want to explore and feel driven to?

Amanda:
I started making dolls when I was in college. They were more humanoid creatures, very different from what I make now, but the elements of sculpture and making them look like antiques started all the way back then. I think there is something extremely gratifying about making a character that exists in three dimensions. The light can hit it differently, it can be placed in different environments, etc. The things that make it so wonderful are also the things that are the greatest logistical challenges, however. But I’m getting better all the time, and always making improvements. Also, I had a ton of stuffed animals when I was a kid. They were my friends, and I loved them dearly, and still have a few of them. Making my guys soft-bodied is pretty natural to me, because I want people to touch them, and pick them up, and interact with them. They feel like bags of sugar in your hand, and they sort of form to the shape of what they are sitting on, it’s very comfortable to hold them. I want people to feel as many connections as possible to my work.

Carisa:
Creating dolls as an art form seemed an anathema to me at first — I pretty much shunned dolls as a child, and instead had numerous stuffed animals and action figures. It wasn’t until I had to sculpt and sew a stop-motion model several years ago for a class that I had my “aha!” moment and transitioned into dolls as a form of expression (my lack of patience for the stop-motion part was not so inspiring). Shortly after the stop motion class, I attended several workshops with Wendy Froud, and was hooked. At the time, I was more involved in illustrating which has since fallen by the wayside. How people react to and connect with my dolls is much more satisfying than what I’ve ever accomplished through 2D work.
As far as new mediums go, I’m eager to learn and try my hand at mold making and casting after seeing the amazing things other artists have done. 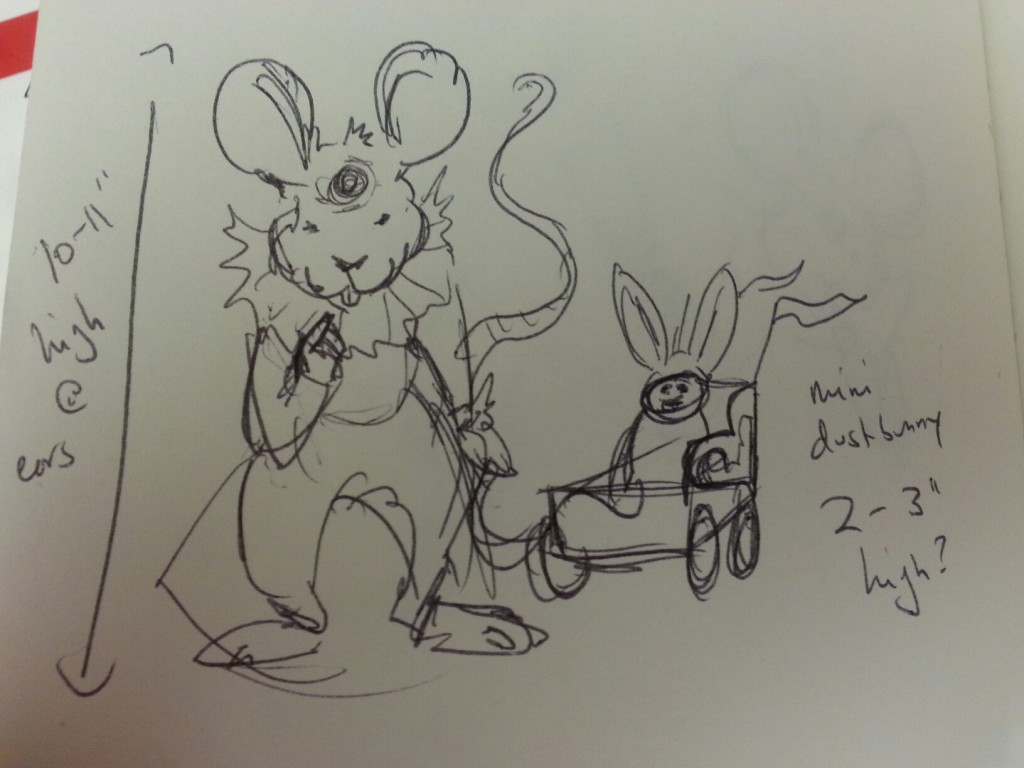 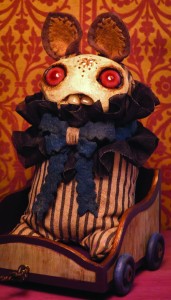 CP: What do you collect? How have your collections influenced your art?

Amanda:
My collections have absolutely influenced my art…and quite often they end up in my art as well. Most everything I collect is antique/vintage in nature…while I love looking at a lot of modern things, they rarely feel like something I want to live in the same space with. I collect old things because I find the patina of age beautiful. Not just aesthetically, but the idea that an object was used for decades before I got my hands on it is totally magical to me. I have a few really specific collections: Pre-1940 medical/dental equipment, antique dentistry-related items, ragged vintage taxidermy, and old lab/medicine bottles with killer typography on the labels. I have a bunch of “random antique weird stuff” that I find at flea markets and shops, and that’s the stuff that usually finds its way into my art, since they’re not permanently housed in one of my curated collections. A more recent obsession of mine is antique prize ribbons – I prefer 3rd prize and lower. Always rooting for the underdog.

Carisa:
Glass objects—marbles and witch globes specifically. However, stashed away I have a tremendous collection of yarn…all kinds—natural fibers, hand-dyed, acrylics, in a variety of colors. Never mind the fact I haven’t knit anything more complicated than scarves….
I wouldn’t say my collection has a tremendous influence on my work, though I do find inspiration within the lovely hues of my numerous (unused) skeins.

CP: How did you two end up collaborating? It’s a perfect match, and makes so much sense!

Carisa:
It really does. My dentist (!) first introduced me a few years ago to Amanda’s website and I was immediately smitten. I hadn’t seen anything like her Dust Bunnies, and was taken in by those wide-eyed expressions and vulnerability. This admiration of her work only deepened after I met Amanda at the opening of her “Origins of the Forest” show in NYC. There was an immediate connection, and her sense of humor had me pretty much in tears from laughing so much. So, you could imagine how I jumped at the opportunity to collaborate with Amanda for MM3! I sketched out a few ideas, there some discussions, and the end result came together beautifully!

Amanda:
I’ve been a big fan of Carisa’s work ever since I first saw it! It has all the things about it that I love visually, and the level of craftsmanship and attention to color and detail is just beautiful. I finally got to meet her last year, and we hit it off immediately and I knew she was absolutely my kind of weird, and when she mentioned a collaboration, it was obvious that it should happen. She does need to move to Ohio so we can hang out more though….

Carisa:
I’m pretty sure we could achieve lagamorphic world domination together, it’s inevitable.\ 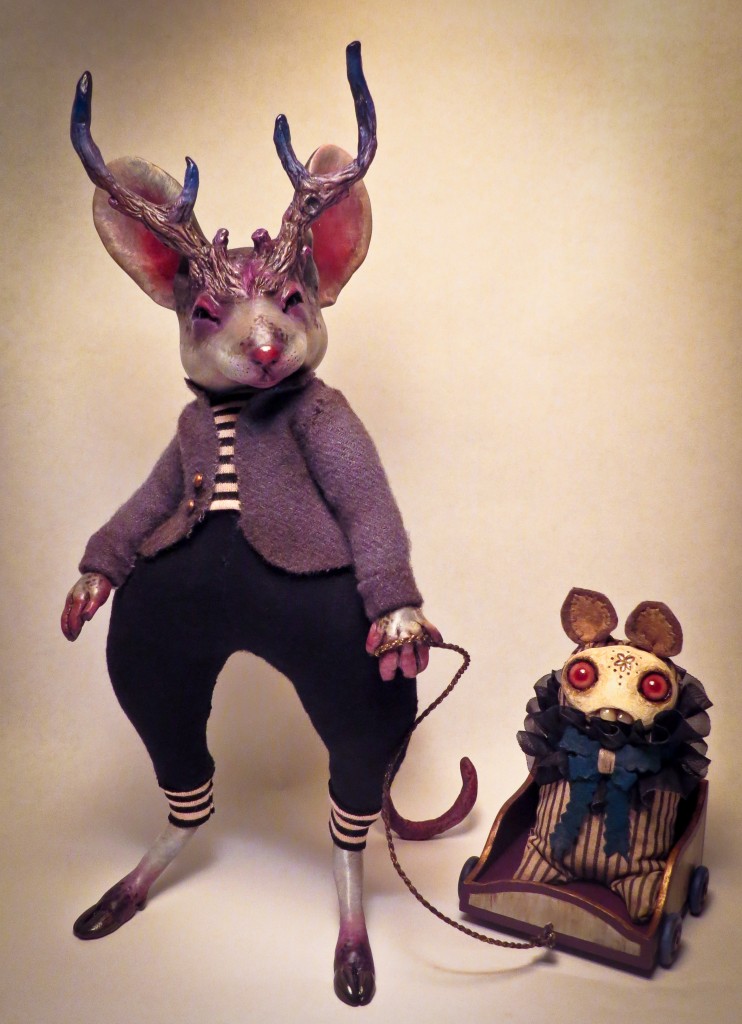 Miles and Burdock, by Carisa Swenson and Amanda Louise Spayd