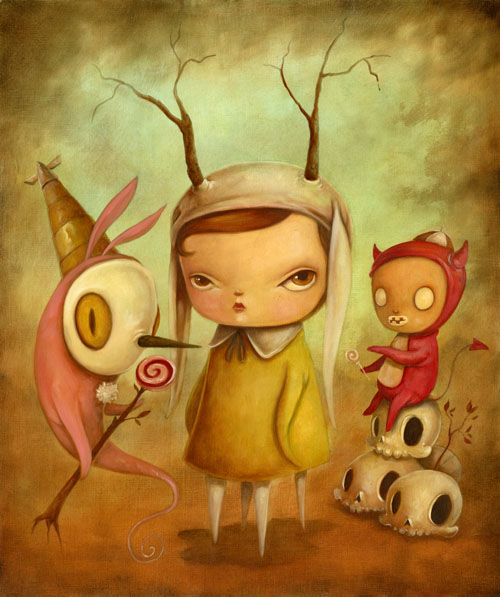 Aside from the numerous original sculpts being showcased at the Monsters & Misfits II exhibition opening this Friday in Japan (about 60, collectively), Kathie Olivas also has a handful of oil paintings up for grabs. Shown above is “Constance”, a 16″x20″ oil on panel. 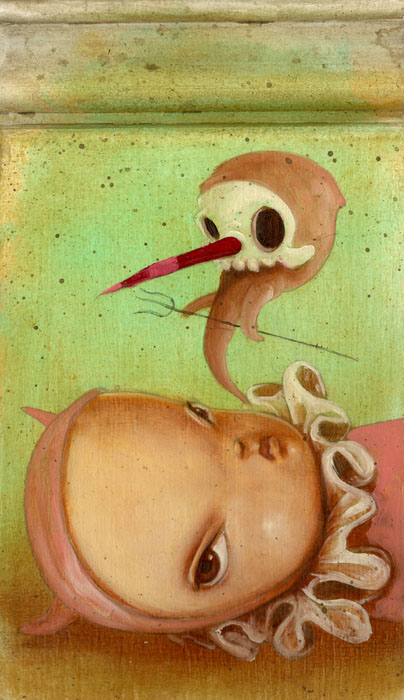 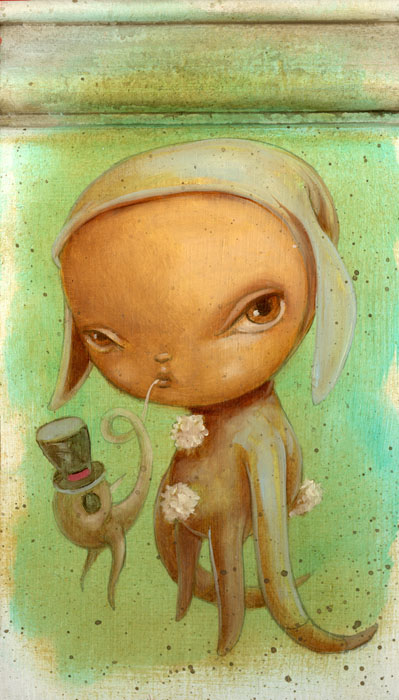 The Kusakabe Folk Museum Prepares for the Monsters 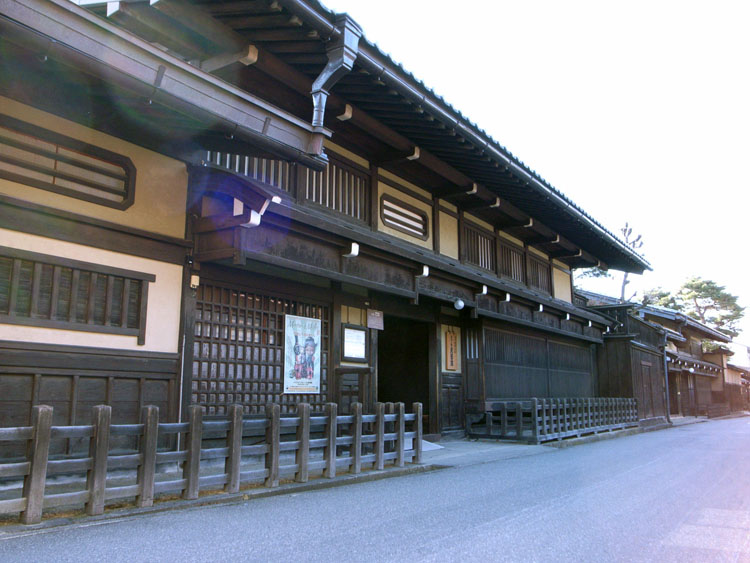 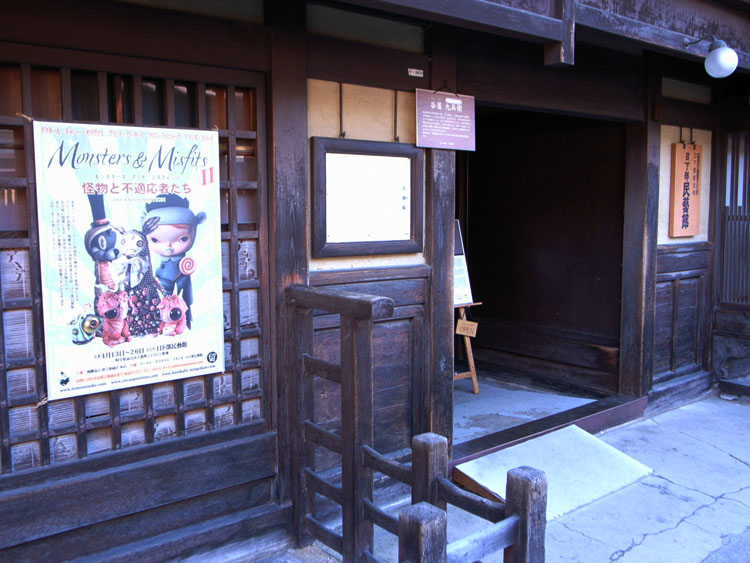 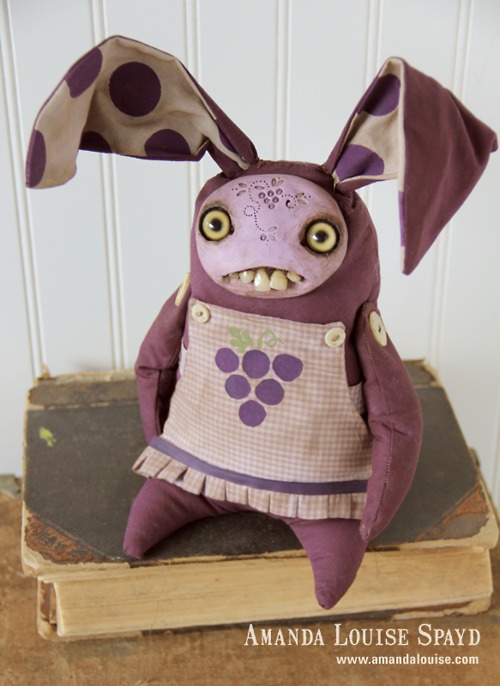 Amanda Louise Spayd is exhibiting 7 resin and soft sculptures as part of Monsters & Misfits II in Japan. Among them is Grape, an original critter who looks to be a wine or jam maker of sorts (yum either way). With those impressive ears, Grape probably stands (well, sits) around 13 inches and the buttons on the arms are a nice touch — like an old teddy bear. With the way these are evolving, I wouldn’t be surprised if these guys soon have movable parts! 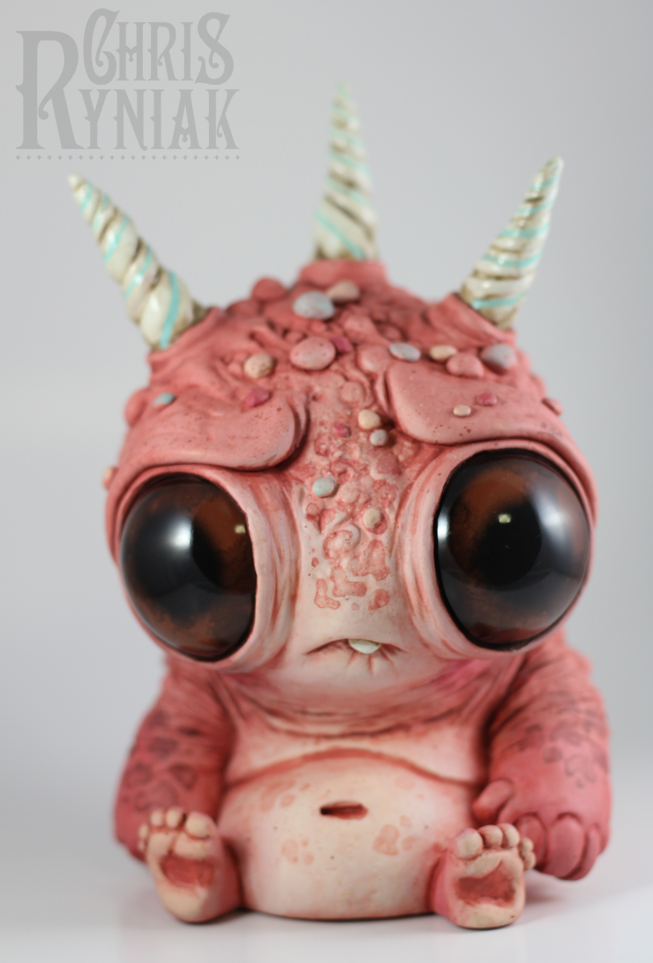 The week of Monsters & Misfits II is finally upon us, and while Kathie, Brandt, Chris and Amanda drive each other crazy on a plane for the next 12 hours, we get to enjoy some sweet final teasers for the event before the big opening on the 13th. From Chris Ryniak’s monster studio comes Berry Triggle, a custom Bubblegut, and Great Gruggle: The Candied Overlord, which I believe is an original sculpt (who stands an impressive 18 inches).

Stay tuned as we drop more teasers to celebrate the opening of this special CP exhibition! Best wishes and congratulations to the artists as they travel to Takayama to meet their monsters and all of the Japanese collectors! It’s been a long time coming! 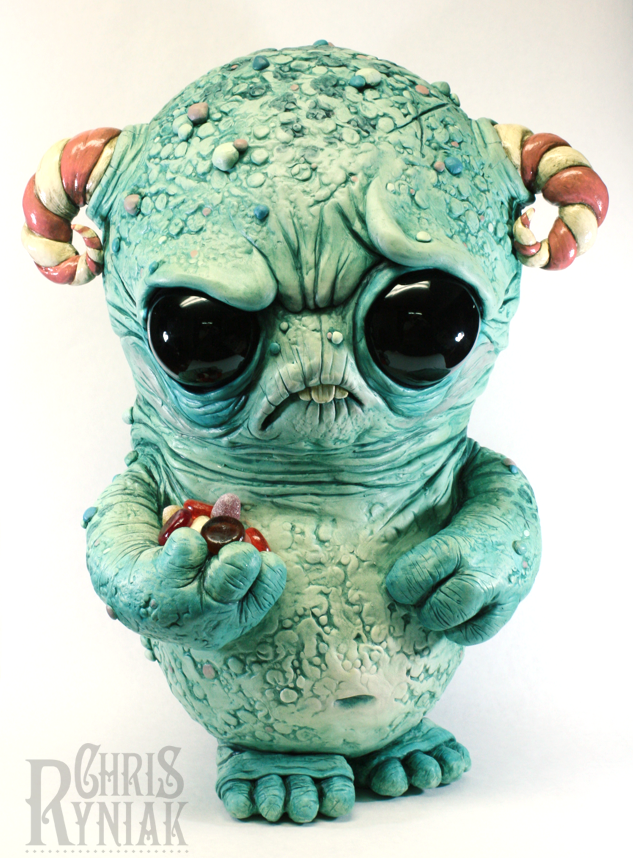 ‘The Baker’ by Amanda Louise Spayd for Monsters & Misfits II 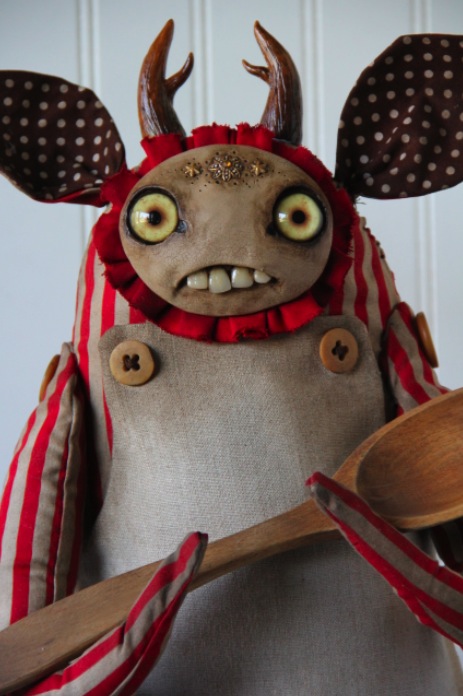 Aside from her insanely impressive Lizzie custom, Amanda Louise Spayd has another big fella for the upcoming Japan exhibition: The Baker. And if she is anything near the height of Mandi’s first two tall dudes (The General and Harvest Gift), she stands at least 30 inches. It’s always such a pleasure watching Mandi’s work evolve — she’s performed many engineering marvels over the past year: how to make her sculptures sit, develop arms, adopt convincing animal forms and now, compared to her first tall dude, she’s mastered long legs. Bravo, lady! 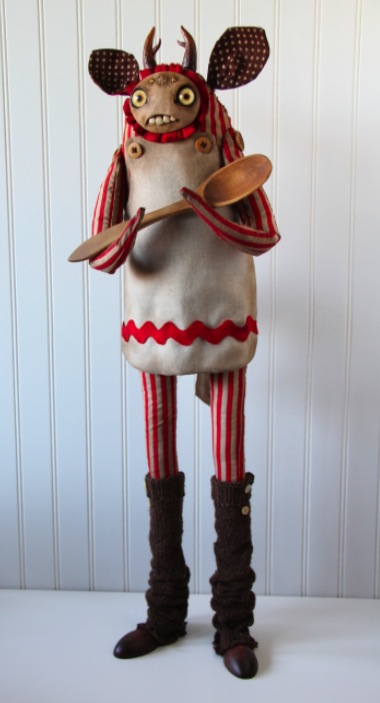 Another Box Touches Down in Japan 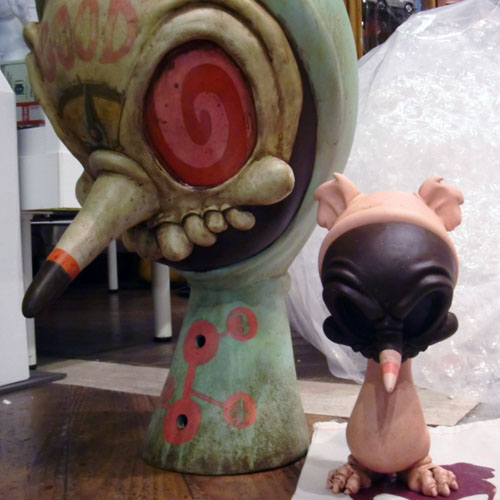 Another box o’ monstery goodness from Kathie and Brandt has found its way safe and sound to Tomenosuke for Monsters & Misfits II. We’ve got a custom Skelve bust, Candy Coated Kumas (yes, that’s a new edition!), followed by custom Kumas w/ embedded Lucky Skulls and a gorgeous encrusted Mega Skelve (the eyes on this one kill me). I could only image the excitement of opening a box like that; a collector’s wet dream! Exhibition opens in just over a week at the Kusakabe Folk Museum — we’re almost there, folks! 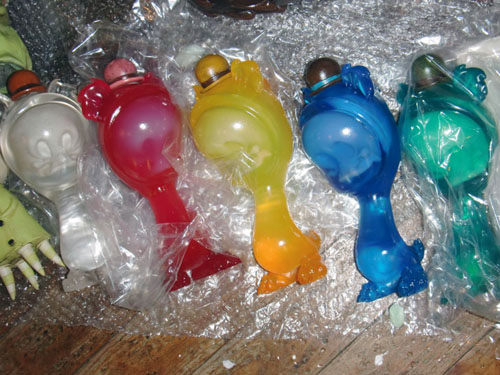 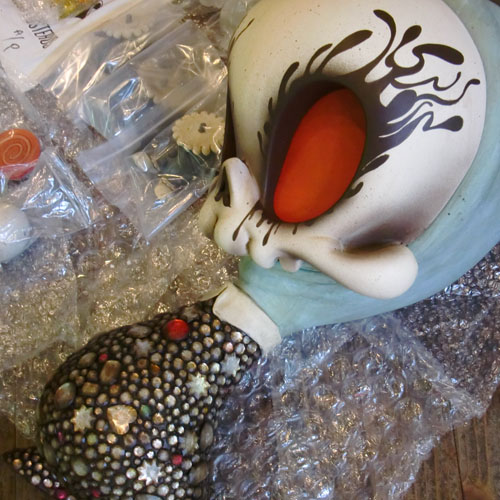 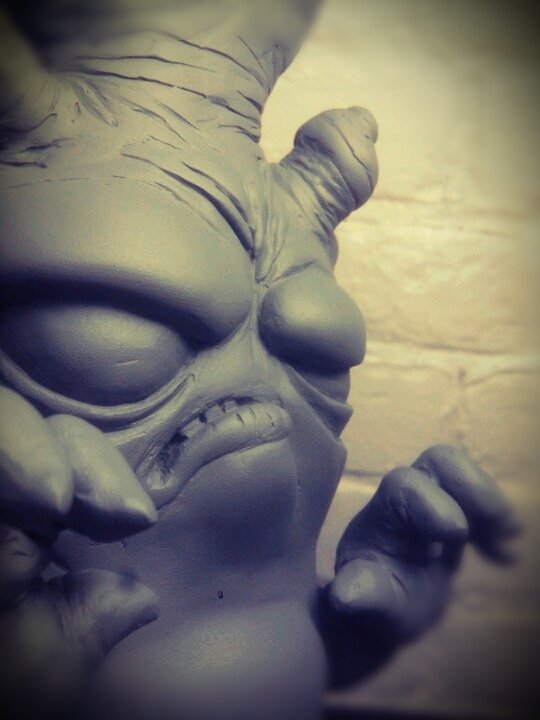 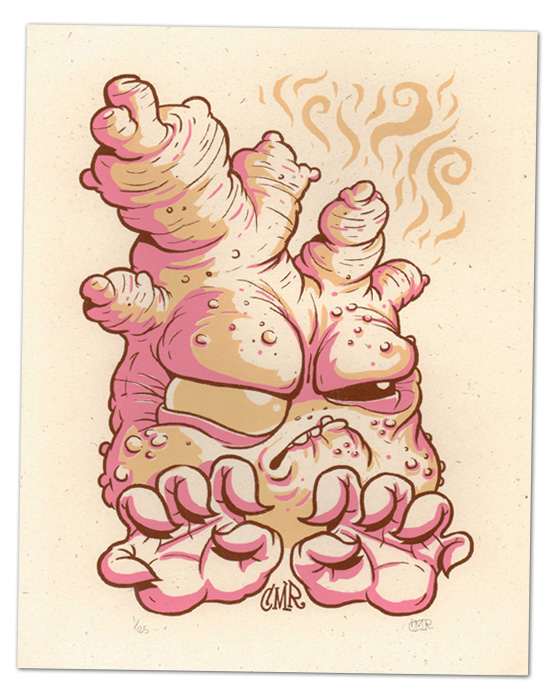 Chris and Amanda’s Monsters Make it to Japan! 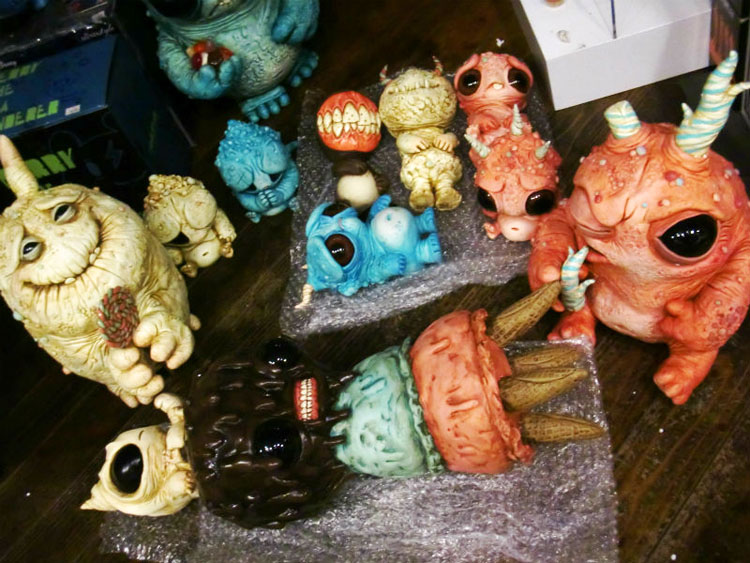 We’ve just received a fresh batch ‘o snaps from Shinji at Tomenosuke showing off a murder of monsters that just touched down in Japan! Fresh air must be nice after being a bubblewrap and cardboard sandwich for so long — they look exasperated. Best they catch up on some sleep now: it’s showtime in two weeks! 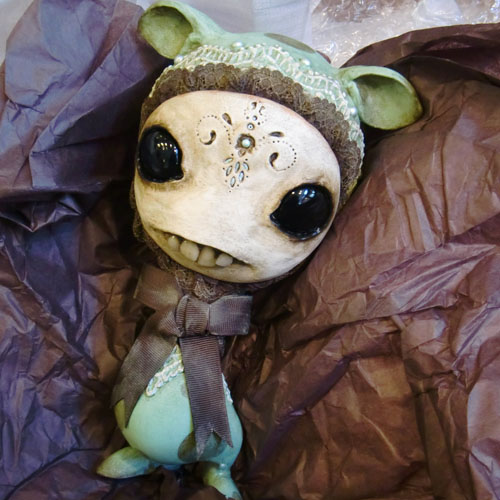 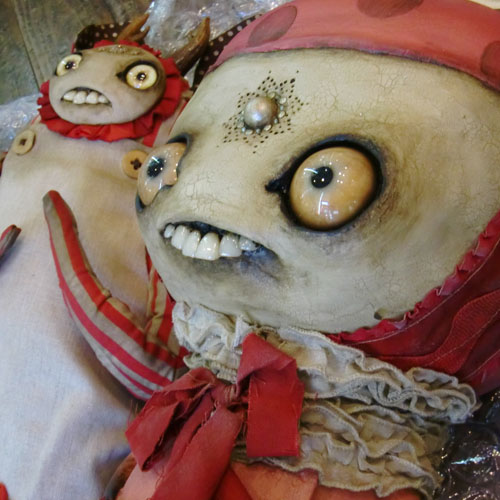 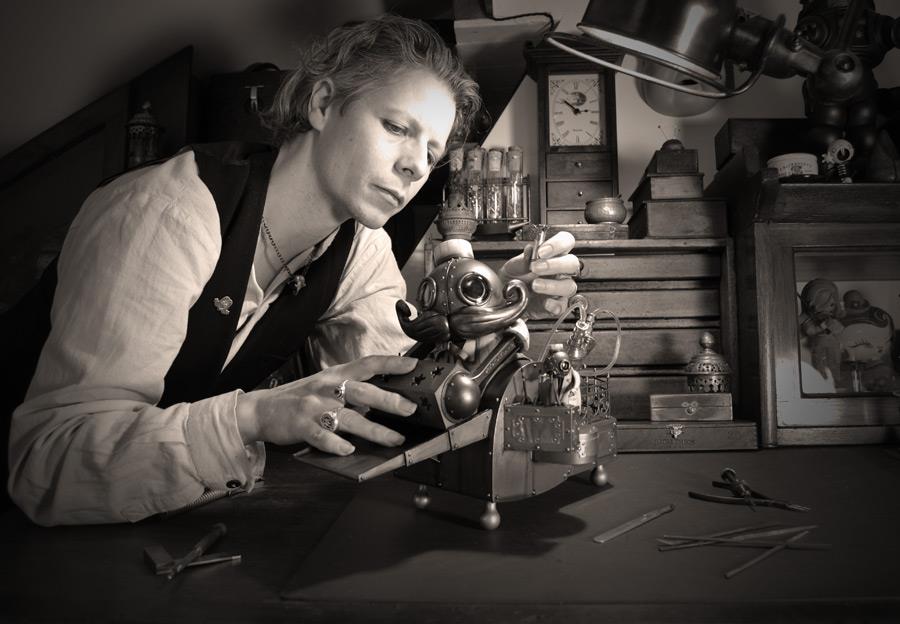 Doktor A recently shared this picture on Facebook of him putting the finishing touches on a piece for Monsters & Misfits II — a sculpture he pegs as the most difficult piece he’s ever crafted. We’ve had a couple teasers of his piece over the past few weeks (here and here), but I think we’re gonna need to see more photos to appreciate the full scope of this beauty. Stay tuned … 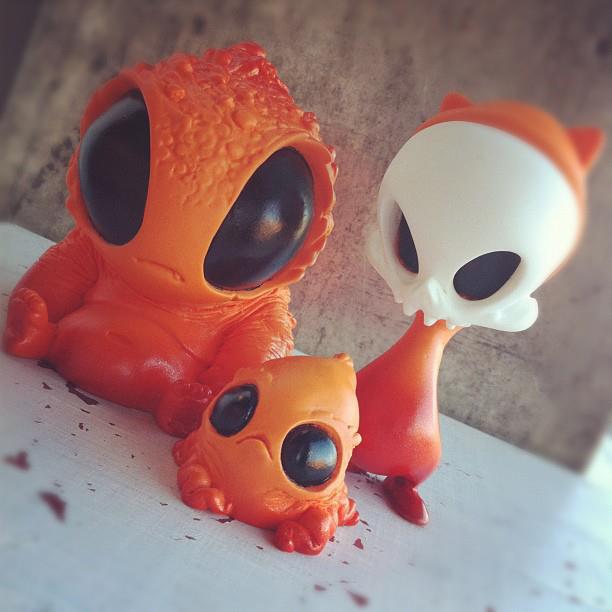 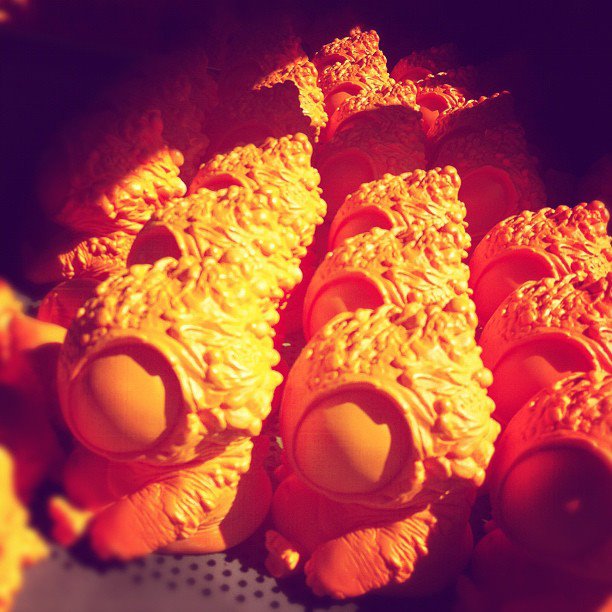