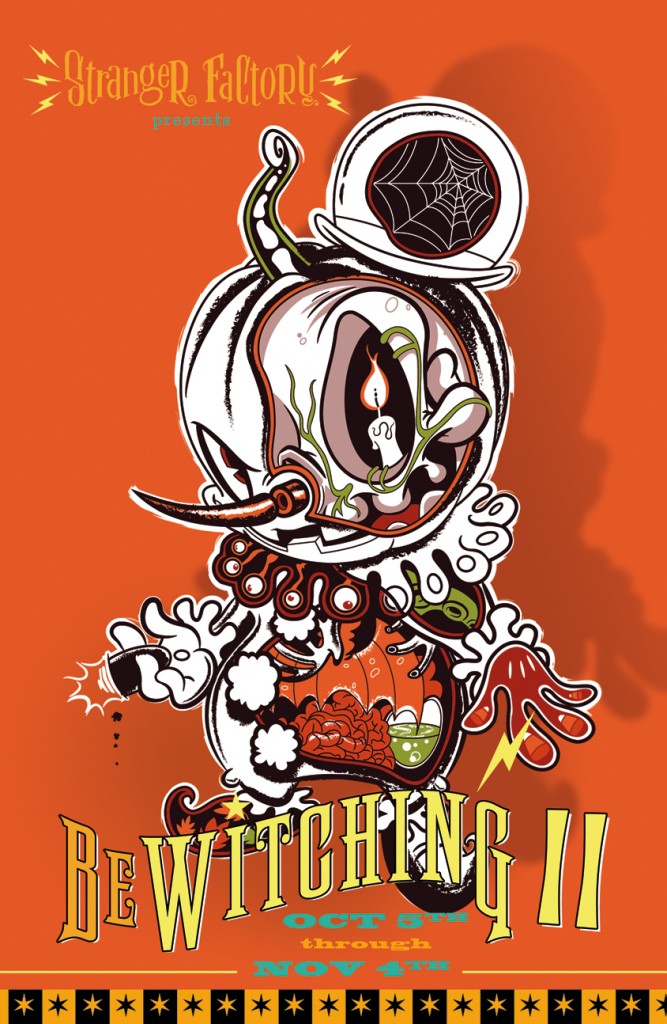 Freaks and geeks, witches and ghouls, our favorite day is upon us and is sure to make you drool! The boards are coming off the doors and windows, the candles lit and cobwebs dusted at Stranger Factory as we busily prepare for the opening of our biggest show yet: Bewitching II. Featuring the works of roughly 40 artists from all over the globe, this show may very well bring about the apocalypse. The teasers alone are enough to cripple all expectations, self-restraint and bank accounts and those were just a sampling of what’s to come.

And we musn’t forget the sheer brilliance of this year’s sideshow act: Gary Ham’s Dead Wood. This will certainly be an exhibition to remember, and for the souls around the globe who can only attend in spirit, I bid you to listen well …

As per every exhibition, locals get first crack at the goods starting tonight through this weekend. Online collectors, the request period opens TUESDAY, Oct. 9 at  12 noon PST. It’s been pushed back a day on account of Baby Tattooville. Given the volume of art on the preview, an email may not be sent out to collectors in time. That said, the list is being constantly updated on the Stranger Factory website so check in this evening for the full spread. Please avoid camping on the site as it creates a lag for everyone. Art from both shows will be compiled on the same page.

Bewitching II and Dead Wood open TONIGHT with an reception from 6-9pm. Gary Ham will be in attendance! The exhibits run through Nov. 4th. 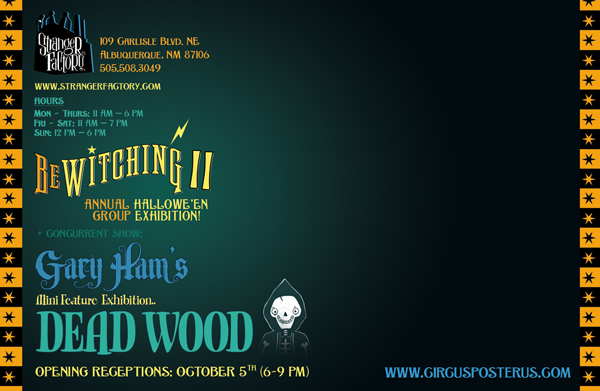 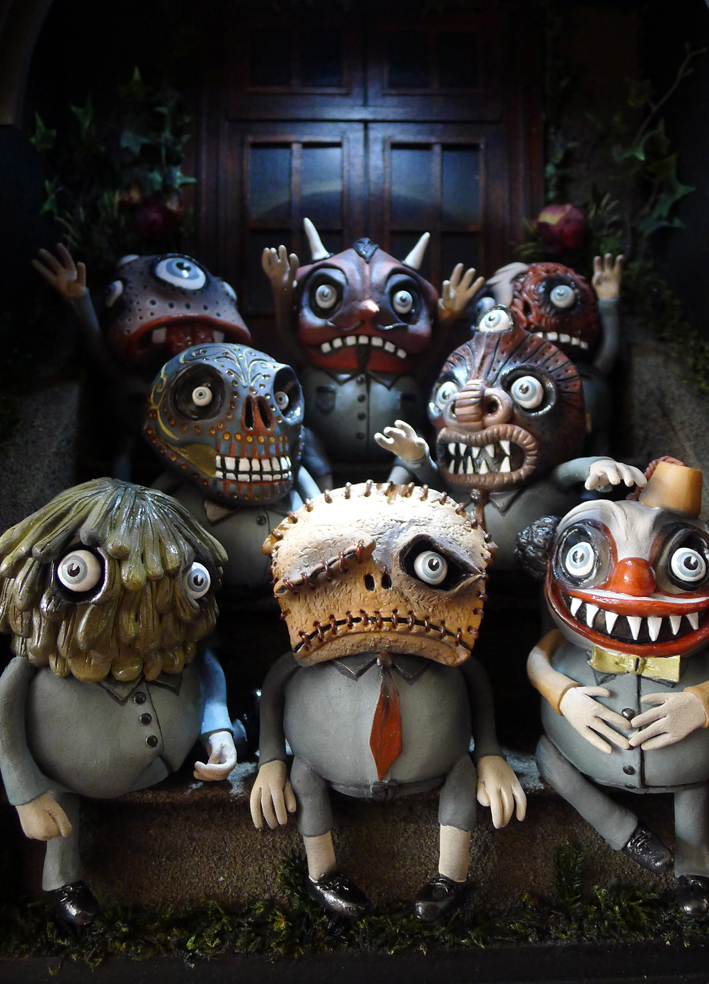 Some of you may recall Seymour’s nightmarish sideshow from Strychnin’s Emporium exhibition (with Doktor A and Skeleton Heart) earlier this year. But if you’re unfamiliar with the work of Berlin-based artist, now’s your chance to see him at his best.

Continuing the carnivale theme, Seymour presents “The Mascarade”, an installation comprised of eight polymer clay and resin figures all housed in a vintage wooden clock body. Customised to look like the front of an old house, the characters sit on the front steps, eagerly awaiting someone brave (or foolish?) enough to approach for candy. Oh, they’ll give you something, all right … 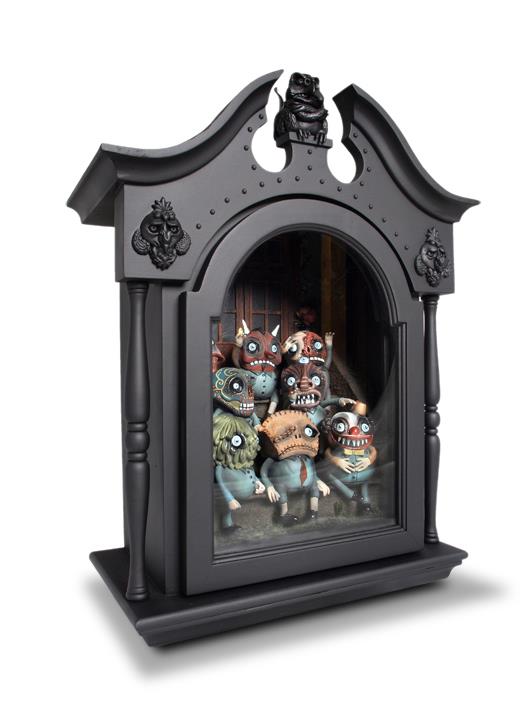 The clock box measures 22 inches (it’s a big ‘un) and includes an internal light to show off the group of geeks loitering within. Something tells me they’ll be right at home at Stranger Factory. 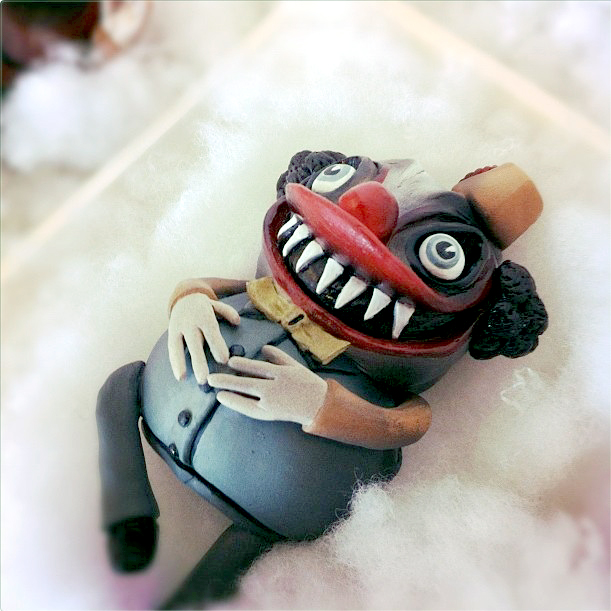 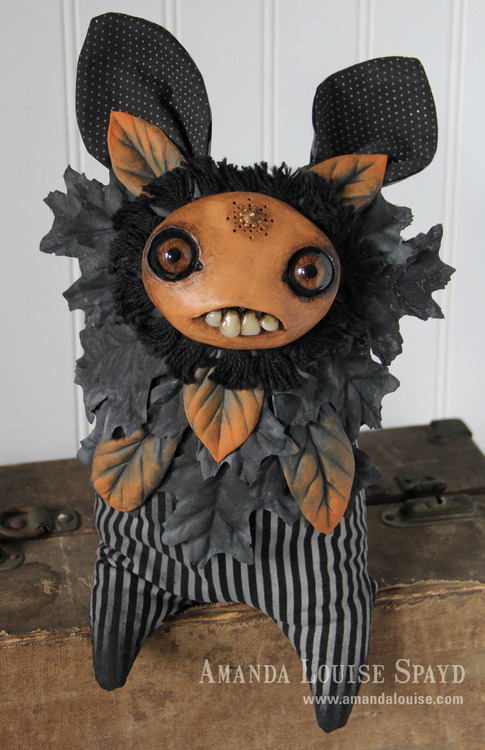 Amanda Louise Spayd is one of those artists whose work consistently impresses and inspires me, and when the air grows cool and the trees become a mosaic of yellow, orange and red, she’s in her element. Magic happens. She reignites our imaginations and reminds us that while we wander the forests listening to the crunch of the leaves beneath us, the sound me not be from our feet alone. 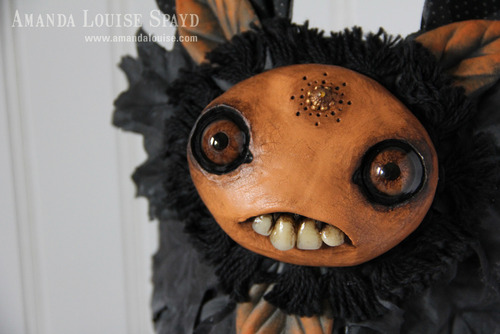 Break Me and I Break Your Finger: Andrew Bell’s ‘Kill Kat #1’ for Bewitching II 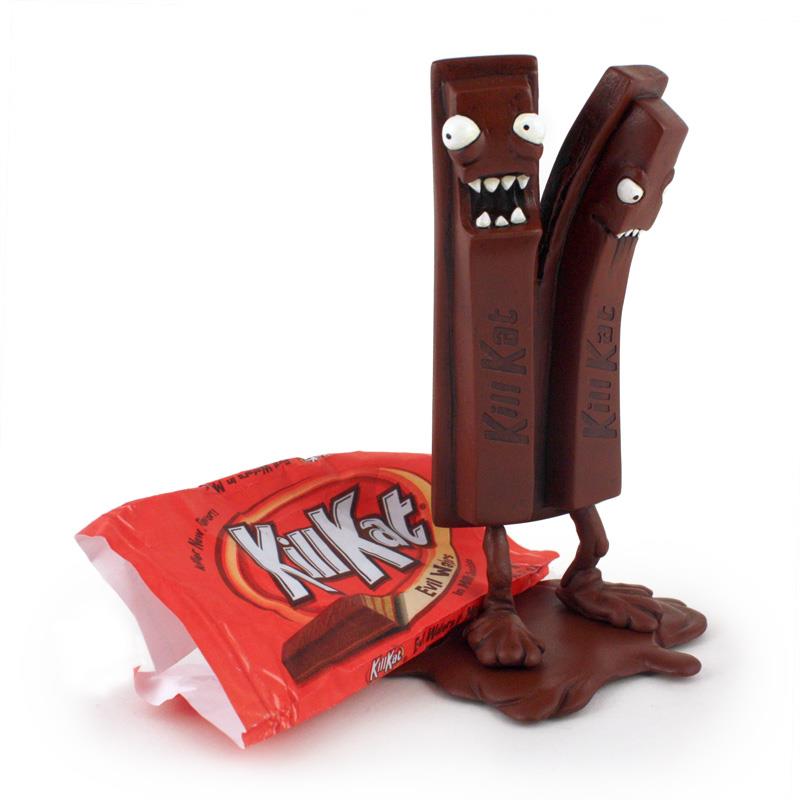 Last year, Andrew Bell absolutely NAILED Bewitching with his “Damned Corn” and “Bat Ball” sculpts. And now, the master of the delightfully dark and hilarious returns with the first-ever Kill-Kat, an obvious (albeit carnivorous) interpretation of the Kit-Kat candy bar. So think again before breaking off-a piece —  it’s all teeth beneath that chocolately treat!

Kill Kat # 1 stands 5.5 inches and includes a glass dome so you can sleep soundly at night. The magnetic melted base is removable and the wrapper is just awesome.

Bewitching II opens THIS FRIDAY at Stranger Factory! Roughly forty artists from all over the globe under one roof,  wielding their uber-artistry in the honor of Halloweenia. Prepare yourselves! 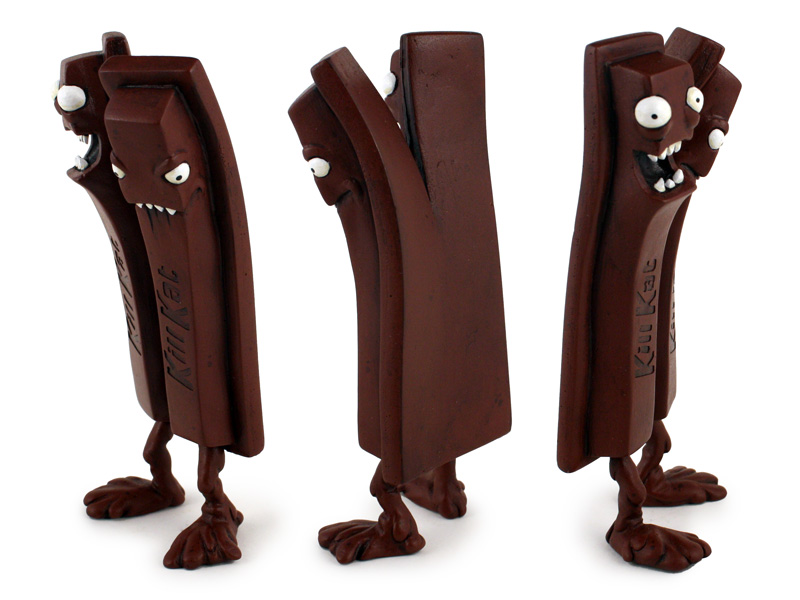 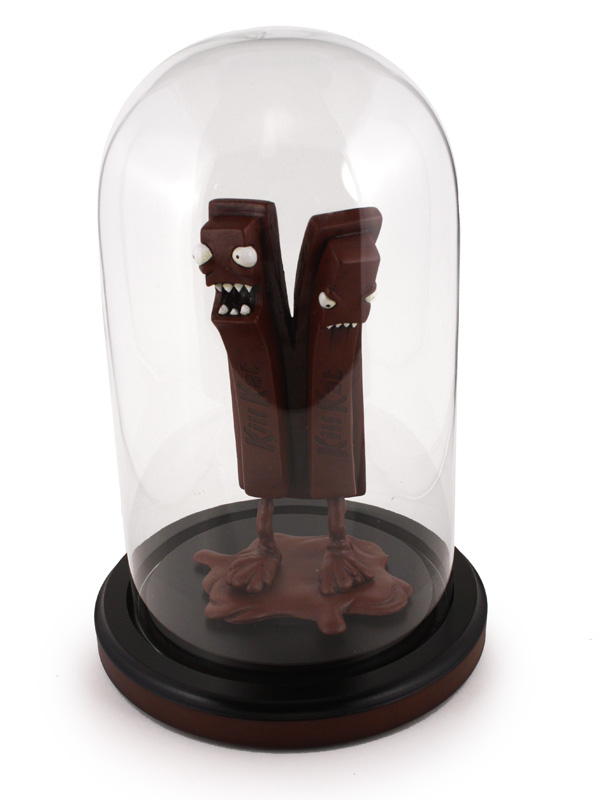 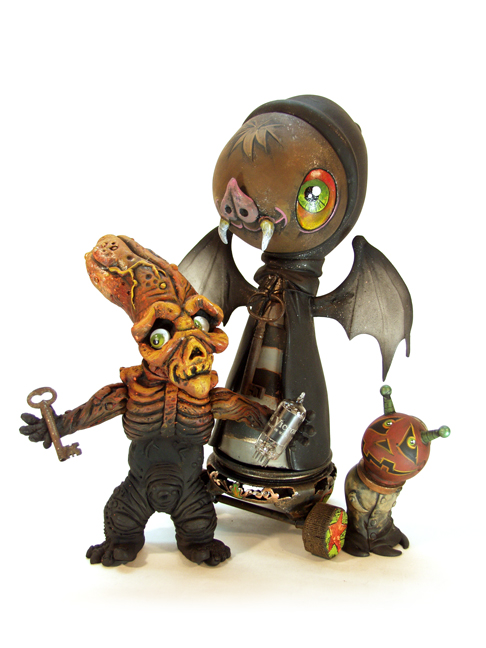 Leecifer is on a roll this year! He came out swinging at SDCC, now Bewitching II, and later a show with Paul Kaiju. It makes us wonder if he will step into the ring with a Thunderlips down the road.

Lee has a trio of terror set for Bewitching II with the likes of the winged cart riding skelve known as Babette, a double faced Jack o’ Sal, and one of those drunk aliens with a magnetic grip, aka PickleBaby.

Bewitching II opens Oct. 5th with an opening reception from 6 to 9pm. The exhibit runs through Nov. 4th. 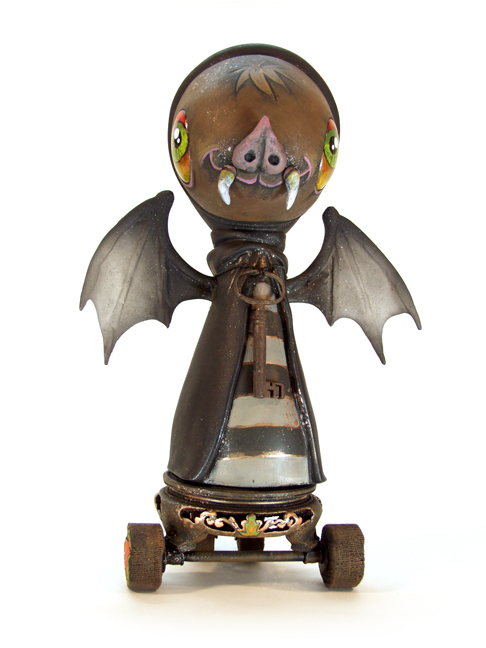 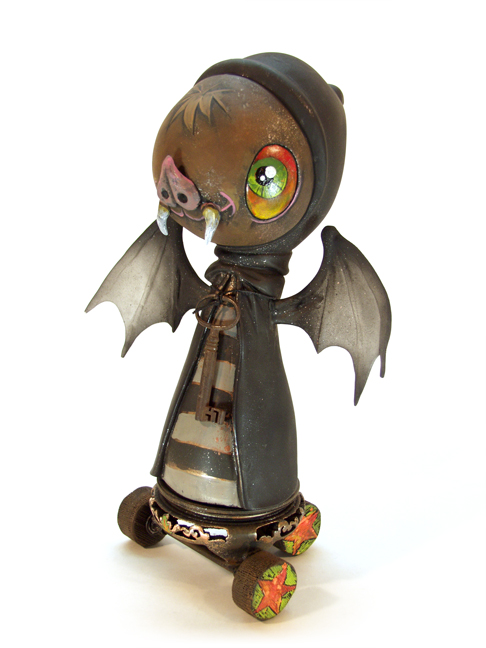 Oh Babette is awesome. A pig nosed bat skelve it seems. Flapping her wings as she rolls around on her little cart with a key to your heart. It would appear I have rhymes when I type sometimes. 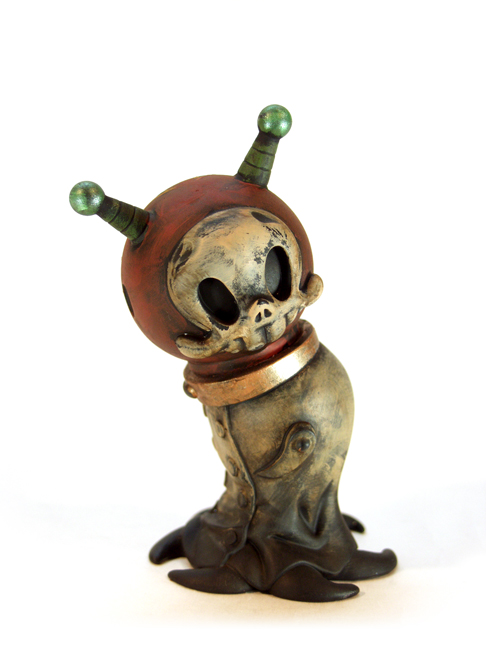 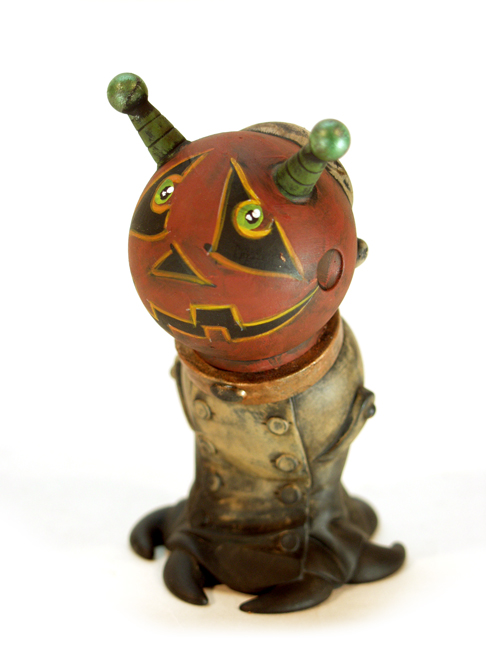 It looks like Big Sal is just doing her  thing, but then BAM! it is a Jack O’ Sal. Two faces to cause two times the terror. 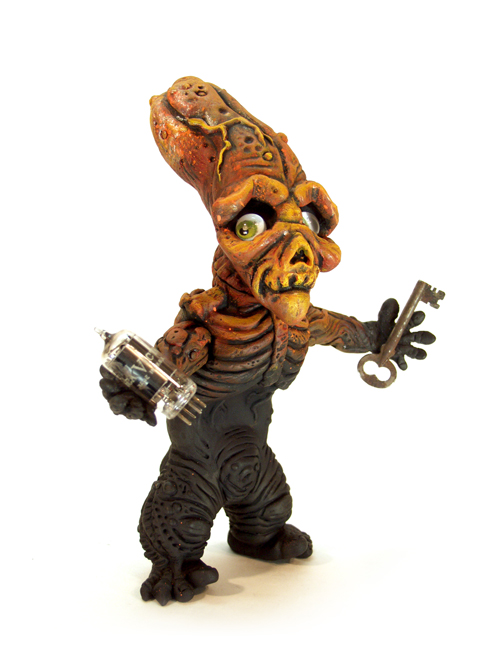 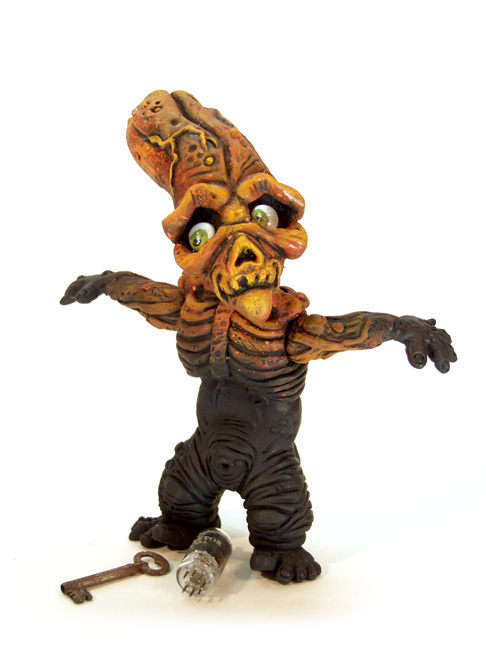 Is this the infamous alien race known as Picklebabies?

“Rumor has it one may have already escaped to the greater NM area as it was observed drinking in an Albuquerque bar and drunkenly demonstrating its alien physiology’s “magnetic grip” on small metal objects. Note not all PickleBabies demonstrate this ability.”

DrilOne Carves Up His Additions for Bewitching II 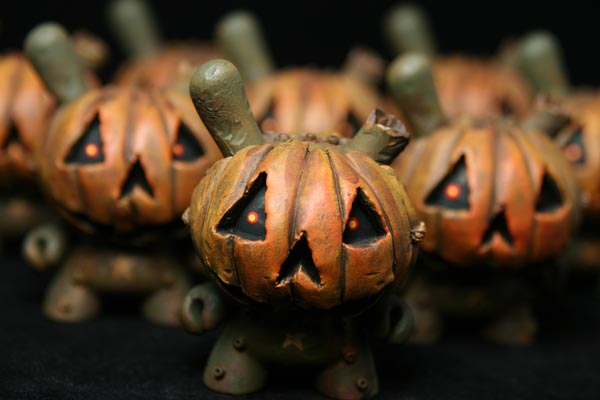 The treats keep coming getting ready for Bewitching II. This time around, DrilOne shows us his carving skills with three new works. 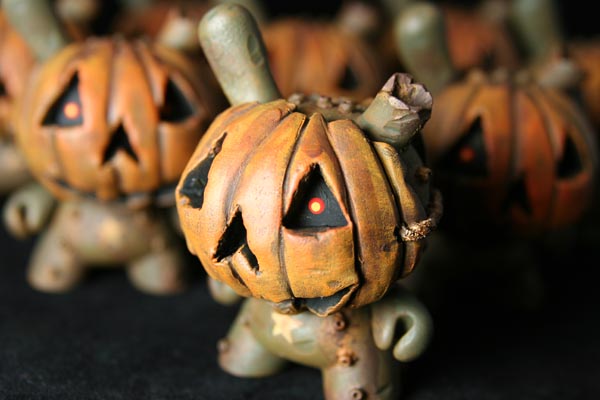 First we have The Wrong Mask II (seen above). A custom dunny series of 10 with 7 being available at the show. 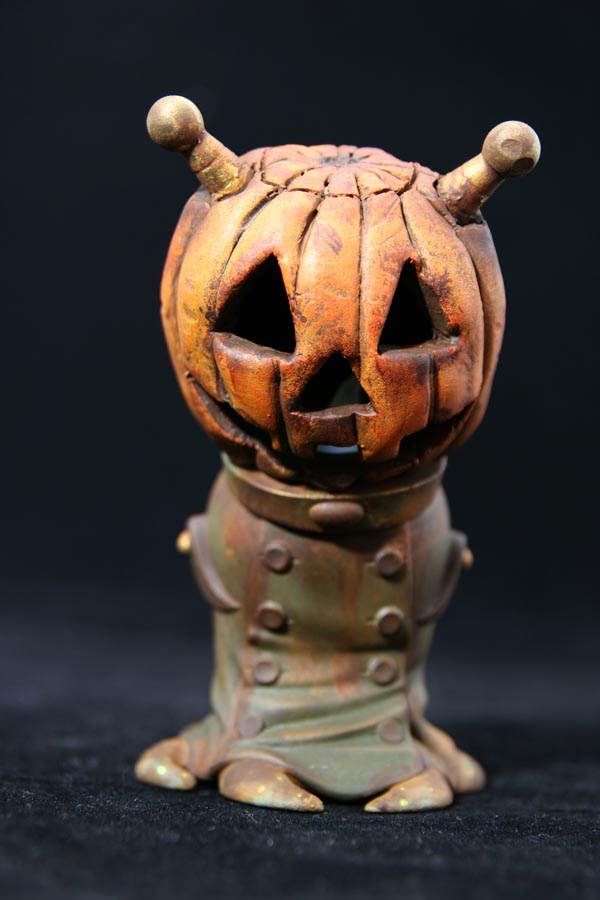 Next, we have The Great Pumpkin Sal. Dril takes his trademark style on the now classic Big Sal. This pumpkin has a secret when the lights go out too. 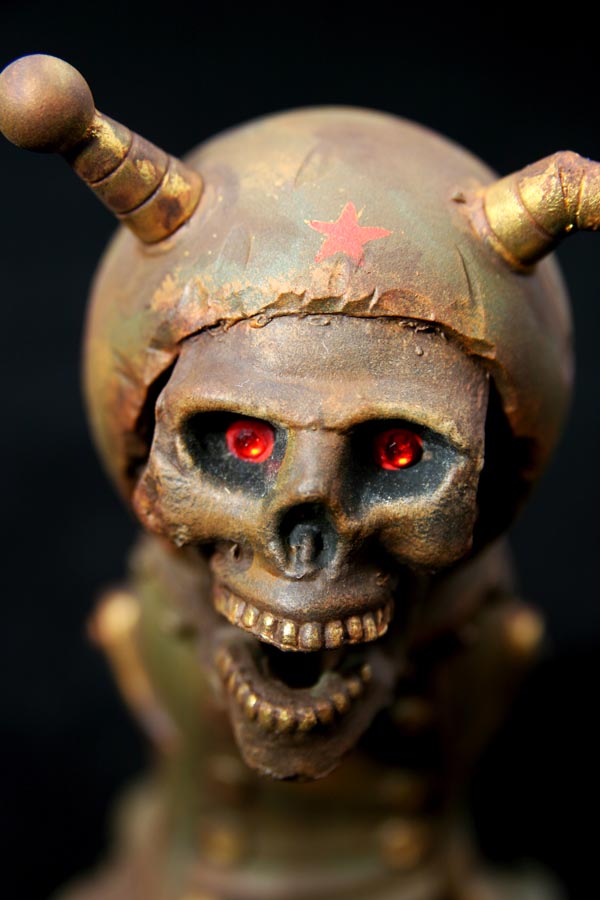 Finally, we see Sal’s Inner Soul. We frightfully get a glimpse at what the lady known as Big Sal has under that dome. She comes at you like Large Marge, but don’t be afraid because that grill is harmless.

The fun known as Bewitching II opens this Friday with a reception from 6pm to 9pm. 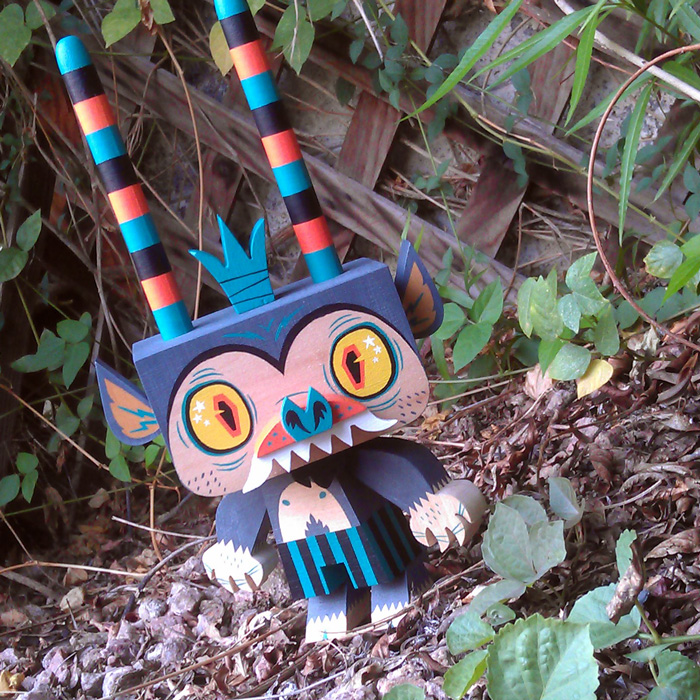 Shhh … be vewwy, vewwy, quiet … You see that over there? That’s Tricky! A satyr so rare that many deemed the breed long extinct, or just a fable told by those floating in the dregs. But there he is, in broad daylight and natural habitat — the last of his kind, I reckon. Tricky’s a prankster type, so step carefully; I bet he’s rigging the place with tripwire before heading out Albuquerque.

A custom-cut and hand painted wooden figure by Gary Ham, Tricky stands 14 inches, much to the credit of two candy stripe horns atop his head. Catch him and his maker next week as part of Dead Wood, opening Oct. 5th at Stranger Factory. 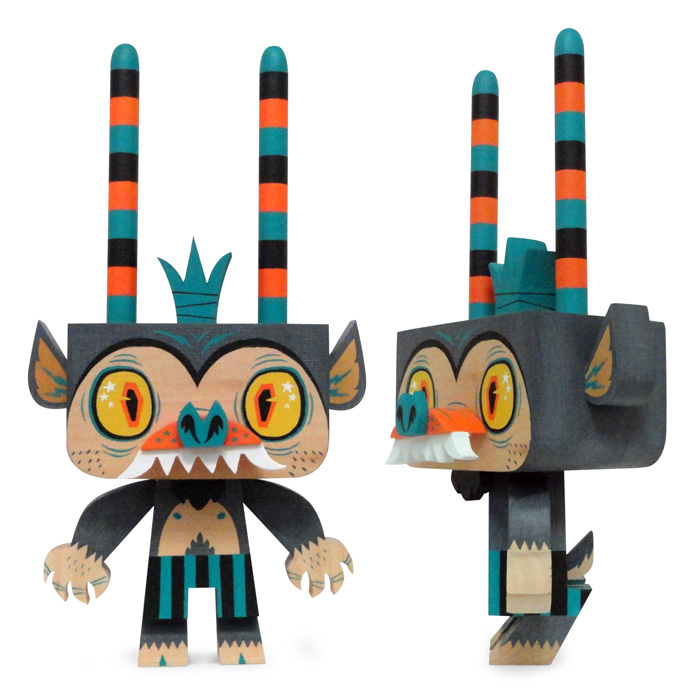 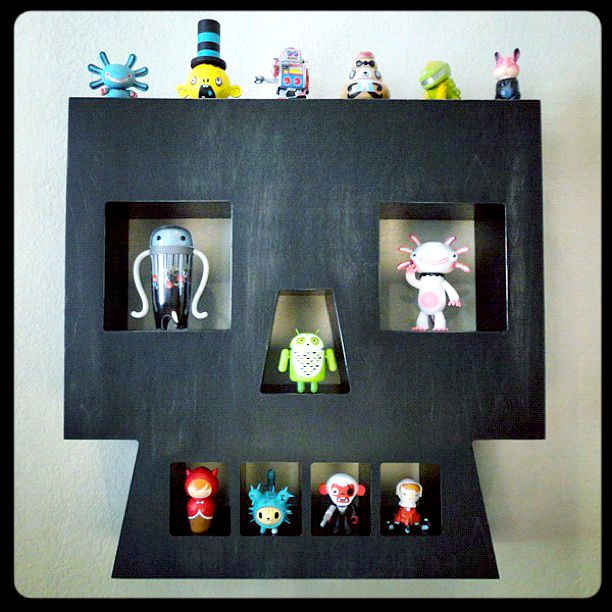 So Halloween is kind of a big deal in these parts and we’re all stoked to bits as fright night creeps ever closer. We have two cracking exhibitions in store for the event: our second annual All Hallow’s group show, Bewitching II, and Dead Wood, a mini exhibit from the great Gary Ham. Our Steve Brown recently caught up with Gary to gab about the show and the surreal spookery he’s bringing to Route 66 Oct. 5th.

Steve Brown: Let’s talk about your upcoming exhibition, Dead Wood. What’s the story with this new group of work?

Gary Ham: With the show taking place in October along side the Bewitching show, I thought it would be a lot of fun to keep my theme to creatures of the dead and an overall Halloween feel. I love drawing monsters and working in wood, so Dead Wood felt like the perfect title for the show. Usually the monsters might lurk behind the trees, but in this case, the trees became the monsters.

The Horror Art of Mia Mäkilä 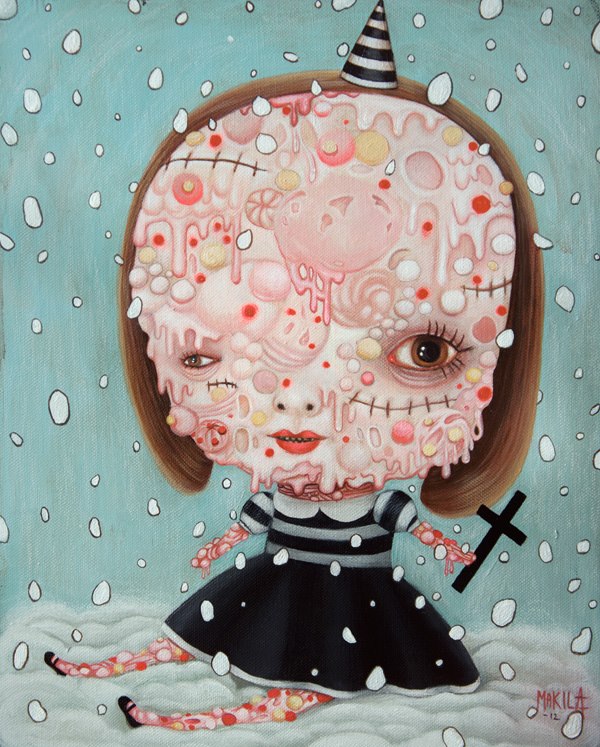 While television networks start their horror programming gearing up for Halloween, we too are getting the bats hung and knives sharpened. This is perfect timing to show off the self taught, images-from-your-nightmares work of Norrköping, Sweden’s own Mia Mäkilä who is one of the amazing artists in Bewitching II at Stranger Factory. To best describe Mia, we’ll go with her own words:

“I guess everyone’s calling me a “horror artist” because I deal with difficult emotions and themes such as fear, angst, madness, rage and sorrow in my art. But I also use a lot of humour. Making my demons having fun on the canvas. You could describe my art as horror pop surrealism or dark lowbrow. My work includes mixed media, paintings and digital collages.

I’m self taught, using my own techniques and constantly learning new stuff. Sometimes it works, sometimes it sucks, but that’s all part of my self education. The fact that I’m also an art historian has definitely had a great impact on my art. But I’m mostly inspired by movies and film directors such as David Lynch, Ingmar Bergman, Alfred Hitchcock, Roy Andersson, Terry Gilliam and Tim Burton and artists like Hieronymus Bosch, Pieter Bruegel, Francisco Goya, Jean-Michel Basquiat and the masters of Disney Studio’s in the 1930’s-40’s. All my colleagues in the Lowbrow Art Movement are also inspiration sources.”

Mia’s work for Bewitching II can be seen starting Oct. 5.

Hit the jump for images of Mia’s past work. 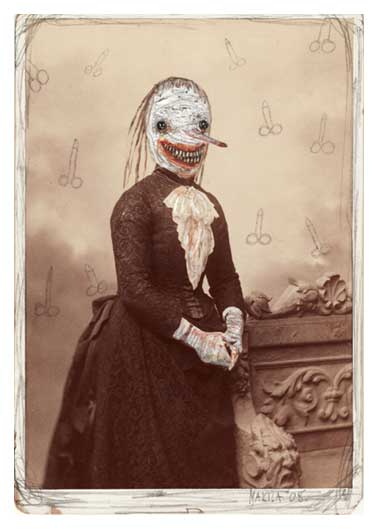 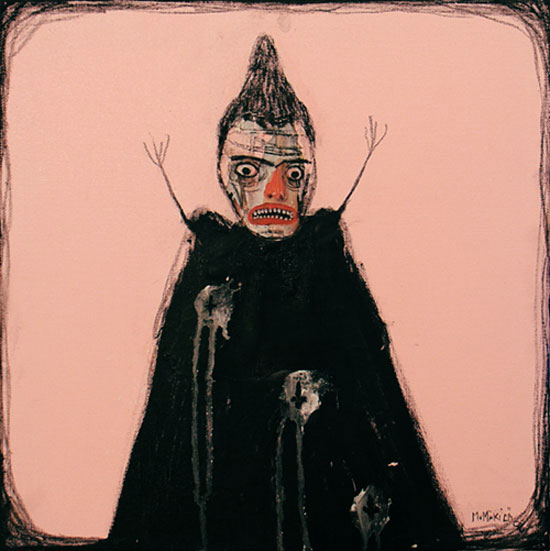 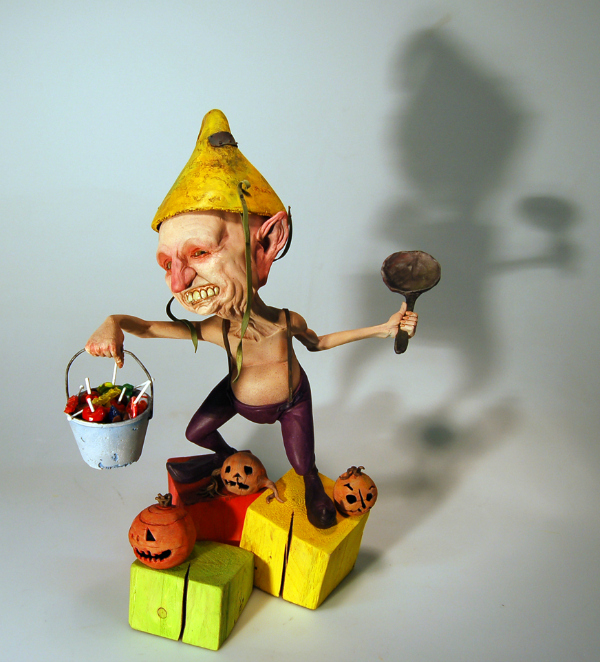 Foolhardy sweet tooths, prepare for an untimely sayonara because The Sweetling is out to smite ya good! This devious character from Cleveland-based artist Rich Klink trolls the night in search of victims to lure in with his old bucket of candy, only to bludgeon and kidnap them! Lord knows what he does with the bodies … maybe he leaves them in a ditch to rot, or drags them back to his forest hideaway. What if there are more of them? Are they cannibals?! What if they boil us alive and use our skin as hats?! No one has ever lived to tell of it … 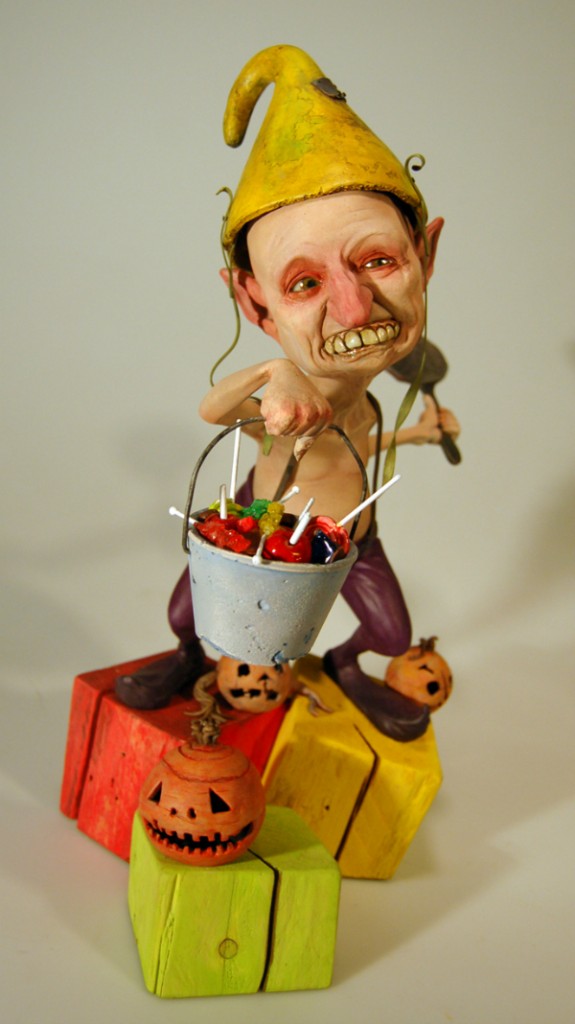 Attributing his aesthetic to “an early fascination with Santa Claus and his toy-making elves,” Klink’s work depicts a fairy tale world stripped of its sugar; a nightmare you cannot wake up from. Fables how they were meant to look and be told, essentially. Be wary of wandering at night, Albuquerque friends … rumor is he’s bound for the southwest for Bewitching II next month …