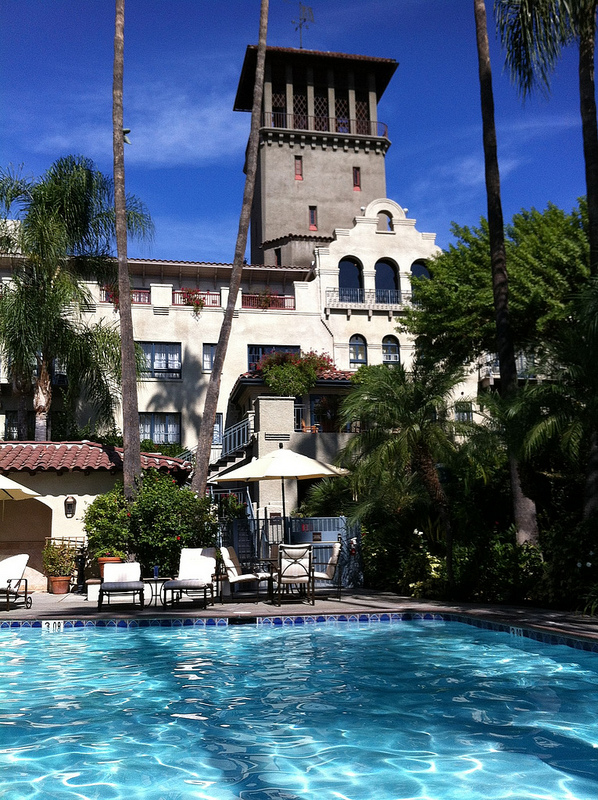 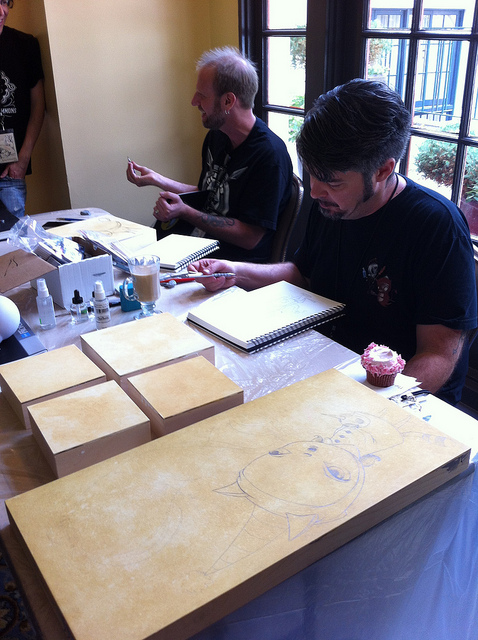 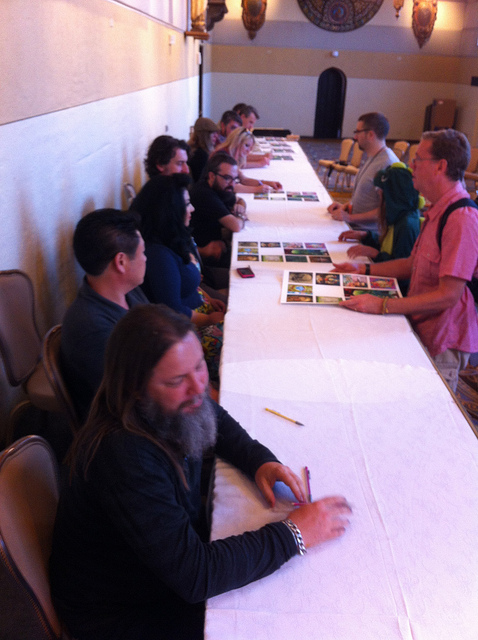 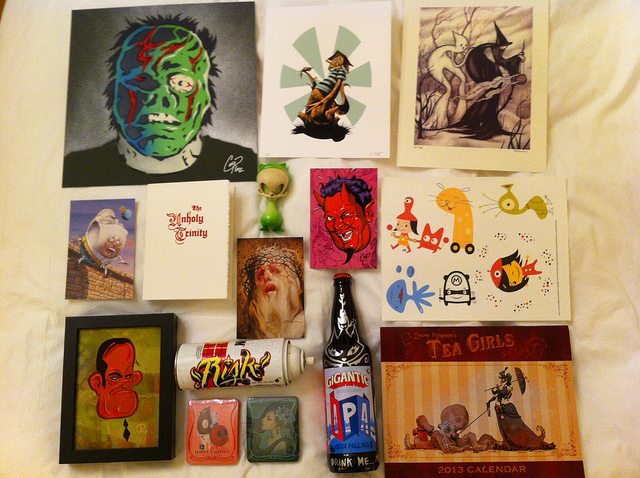 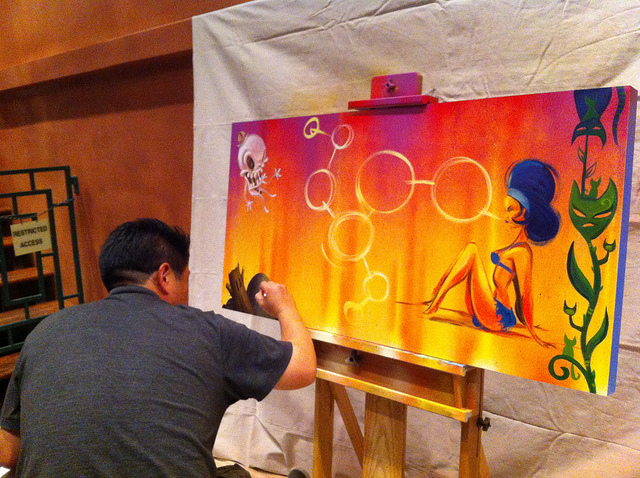 The best item for the guests and artists is called the Art Jam. After the opening ceremonies, a blank canvas is set up in a room with chairs for spectators. Each artist (and some of the guest artists) is expected to contribute to the painting. This year RISK was chosen to start it off and sprayed a beautiful orange, yellow and purple background with other colors matching that color palette. Other artists then jumped in and started adding different elements. 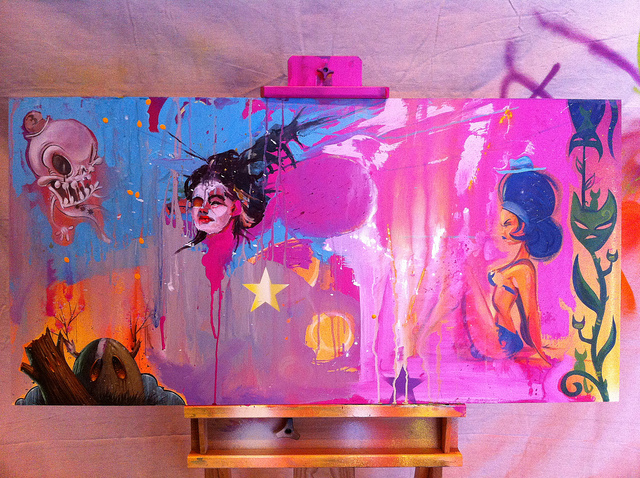 The Art Jam runs from Friday afternoon until Saturday evening. At some point (usually in the middle of the night) someone or a group decide the painting needs to take a different direction. My wife went down before me Saturday morning and came back very upset … someone had covered the center section of the canvas with pink paint. None of the existing work was covered up, which has happened in other years. This happens every year and it finally made sense: artists who were working at the beginning chose a spot and just worked on their piece; Brandt Peters painted one of his signature Skelves up in the top left corner, Ragnar a lovely lady on the far right. Others chose similar areas. By covering the areas in between with an obnoxious color, it forced the artists to work together, filling in those spaces to make a more cohesive piece. 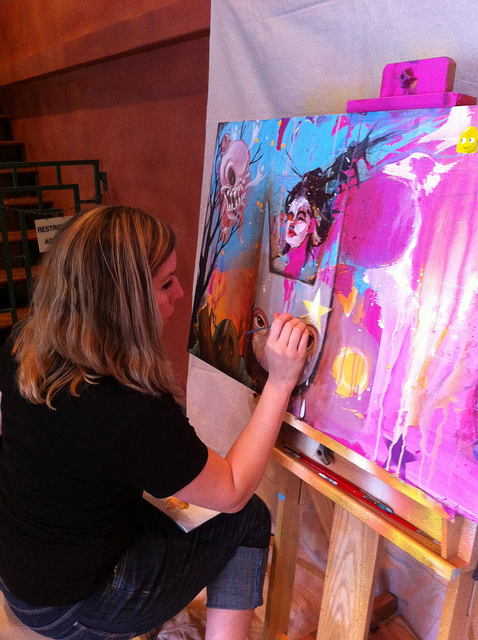 Kathie Olivas got right to work the next morning, attacking a large area in the middle with one of her Misery Children. As the painting progressed and the canvas became full, the fun really started as artists started working on each others’ work. That’s what makes the painting a true group effort and unique. In the end, many of us thought this was the best of the Art Jams. 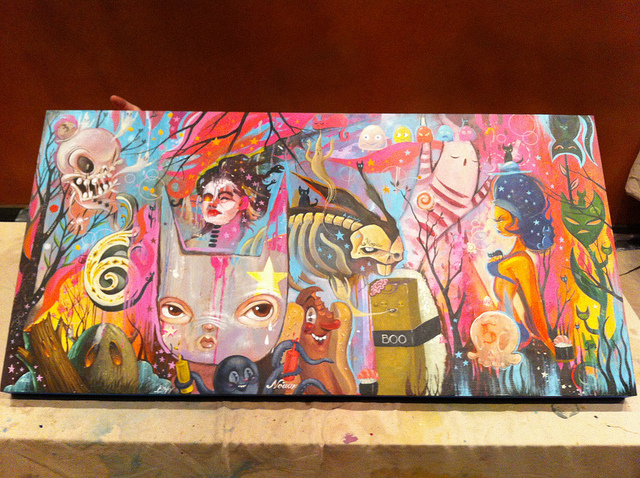 There is a small store set up with whatever each artist brought to sell — anything from original paintings to designer toys. Each guest has a number based on when they first attended Baby Tattooville. The store opens on Friday night and guests are able to purchase one item based on their number. Afterwards, the store is open to everyone. Again, this is not a selling event. Each artist brings only a few items, so you don’t end up buying much. Getting sketches from the artists is really what most people are after. 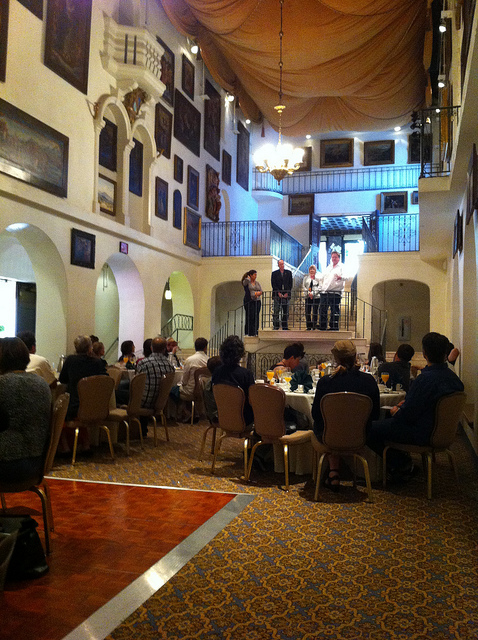 The incredible Sunday brunch wraps up the event. After eating, the guests pick up their gift bags and head out to wherever they came from. There is usually a group (my wife and I included) that stay an extra night and gather at the pool for a relaxing post party. Most people continue to attend each year and it’s great to see friends from years past. I strongly recommend the event if you want a relaxing weekend hanging out with artists and art enthusiasts. It’s like no other event I’ve attended. 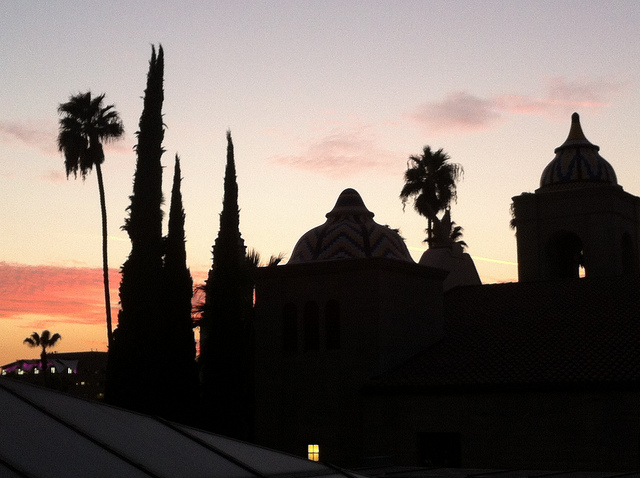 Want to see more snaps from the adventure in Paradise? Have a look at Ron’s Flickr.