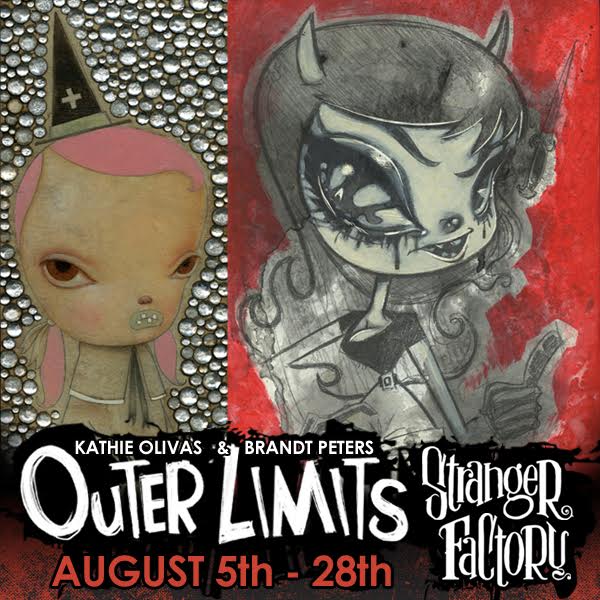 Stranger Factory is pleased to host the second stop for their OUTER LIMITS TOUR at their flag-ship gallery in Albuquerque, NM. Outer Limits opens On August 5th with an opening reception with the artists from 6-9 PM (both artists in attendance).

Outer Limits presents the most recent collaborations and individual new works from this artist couple. Often known for their hand made art toys and limited edition vinyl figures, both Peters and Olivas have also spent the last 20 years developing their careers as narrative painters. This current series of work is inspired by cosmic travelers, psychic healers, futuristic utopias, and a potential zombie apocalypse.

This exhibition tour marks the first time Peters and Olivas have shown together as a two-person exhibition in over 6 years.

About the Artists:
Kathie Olivas is an internationally exhibited multi-media artist from New Mexico. Through her current body of work she explores society’s insatiable desire to assign ‘cuteness’ and our discomfort with the unknown. A dark blend of early American portraiture set in post apocalyptic times, her paintings and hand-made art toys are a satirical look at how fear affects our sense of reality.

Brandt Peters is an award winning internationally recognized and accomplished visual artist, designer, story developer (animation-film), illustrator, character and toy designer. His work hearkens back to the earliest days of comics and animation, with a seeming simplicity that hides layers of intricate back story. His humor and unerring sense of composition, combined with a strong narrative thread that has consistently woven through all his work for the past decade, has made him a favorite of art and toy collectors the world over.