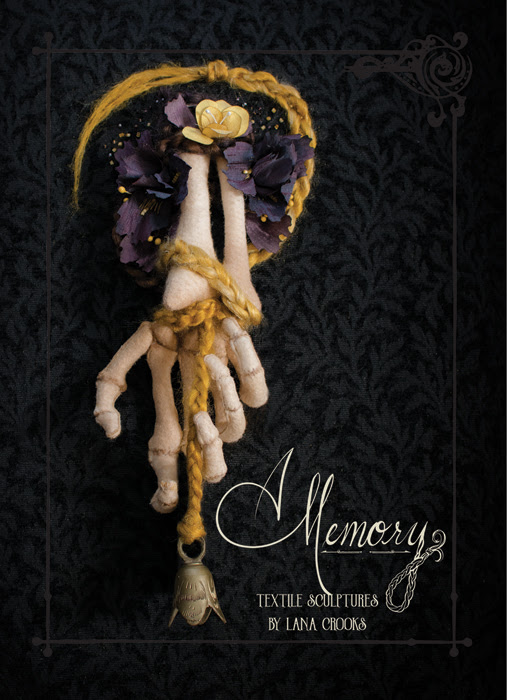 The work for “A Memory” is inspired by victorian jewelry, mourning practices and hair work. For this exhibit I have learned traditional hair work using instructional manuals from the 1870’s and have used a number of materials (even my own hair) to emulate the victorian memorials. Creating wool skeletons and silk flowers encrusted in glass, jet, onyx and other semi precious beads to create modern memento mori specimens.

Lana Crooks loves the antique, the creepy, the cute and the mysterious. Constructing creatures from fabrics and found objects, she is a purveyor of faux specimens and soft curiosities that are a blend of science and fantasy. Sought after for her pattern-making abilities, she frequently teams up with other artists to breathe three dimensional life into their illustrations, earning her two Designer Toy Awards. She enjoys drawing from real specimens in dusty back rooms of Chicago’s natural history museums but, on an average day, you can find her in the studio surrounded by skulls, old books, aging fabrics, and a cat named Tanuki. 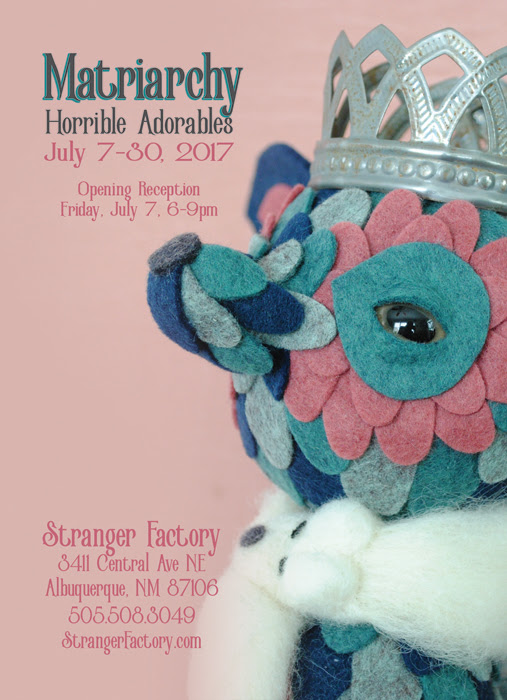 Horrible Adorables current body of work depicts matriarchal societies in the form of anthropomorphized creatures. It shows the social dynamics between royalty and their subjects; from those loyally serving their ruler to the fate of doomed queens after a revolt. Our hybrid creature interpretations are loosely based on matriarchies in the animal kingdom, where females reign supreme.

Horrible Adorables are the creations of Jordan Elise Perme and Christopher Lees; a wife and husband team from Cleveland, Ohio. They met at the Cleveland Institute of Art where Jordan graduated with her BFA in Fiber & Material Studies, and Chris was pursuing training in fine arts after completing his BS in Mechanical Engineering.

Jordan and Chris bring their soft sculptures to life by meticulously arranging patterns of felt scales onto hard carved forms. The resulting characters have qualities that are both cartoonish and eerily realistic at the same time. Horrible Adorables are strange hybrid creatures from a fantastical word. Their facial expressions and postures reveal recognizably human emotions as they interact with one another. Horrible Adorables can be found online and at indie craft fairs, galleries, and boutiques across the globe.

In addition to Horrible Adorables, Jordan also works as a freelance toy and textile designer. She has proudly worked for companies such as Little Tikes, Hasbro and Joann Fabrics.