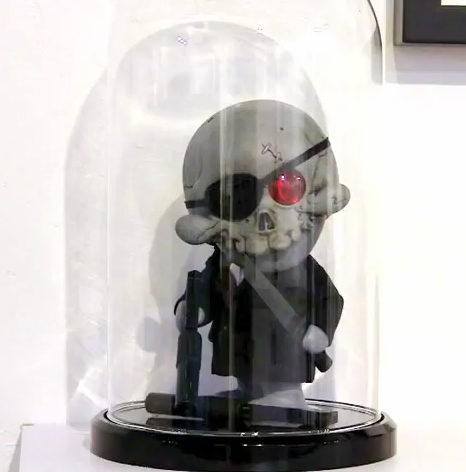 FERG & Brandt Peters‘ TRIGGER exhibition unveiled a plethora of new toy goodness for us to anticipate in the coming months. To kick things off, we’ll start with Brandt’s newest Trouble Boy: No. 7 ‘The Drifter’.

Brandishing two boom sticks and a tanto knife, the black-clad, eye-patched Drifter is inspired by Japan’s Yakuza with the body tatt to prove it (bring on the striptease!). With that said … it probably comes of little surprise that this badass will be unleashed through Tomenosuke-Syoten sometime this year.

Pricing and edition size will be released closer to date of exit. Stay sharp!

END_OF_DOCUMENT_TOKEN_TO_BE_REPLACED

Well that was a hell of an entrance, wasn’t it? Following last year’s award-winning Trouble Boys collaboration, FERG and Brandt Peters reunite for TRIGGER, a two person exhibition at Stranger Factory, which mercilessly melted fans’ faces on both sides of the spectrum.

And CP’s servers suffered a similar fate: as soon as the taskbar clocks flipped to 12pm, the Circus Posterus and Stranger Factory websites were hit with such an unprecedented surge of traffic that it put them out of commission for nearly three hours (in which time the show nearly sells out). Pages weren’t loading, emails were bouncing back, fans were collectively panicking and eating their hair. A netplosion befitting of artists of this caliber, which was only amplified by their collaborative tact. Just look at the pictures.

Cool exhibitions aside, another reason I’m loving Stranger Factory is because it allows Kathie and Brandt an opportunity to use their exhibitions as a means to reveal/release new editions. KO’s Sweet & Sorrow saw the release of the Purple Greeter, and now a whole whack of new editions have debuted at TRIGGER: FERG’s Playge Doctor Skelve, the Overcast Kuma, 4-Legged Masao, and Fire-Eyes Mega Skelve (yes! An editioned Mega Skelve!), as well as the release of the Indigo Fade Skelve and reveal of Brandt’s next Trouble Boy: No. 7 Drifter for Tomenosuke. When an exhibition offers 2- and 3-dimensional works, individual and collaborative customs, limited editions, and sneak peeks from established artists at affordable prices, you cannot go wrong. But be prepared to fight crowds large enough to crack the websphere ;)

Enjoy the full gallery of photos here. More info on the new editions is forthcoming!

Now that we’ve all digested the hors d’oeuvres from earlier, let’s get on to the full course, shall we?! Presented by the CP film crew and made killer by Brandt Peters and FERG … ladies and gentleman! … this is TRIGGER! 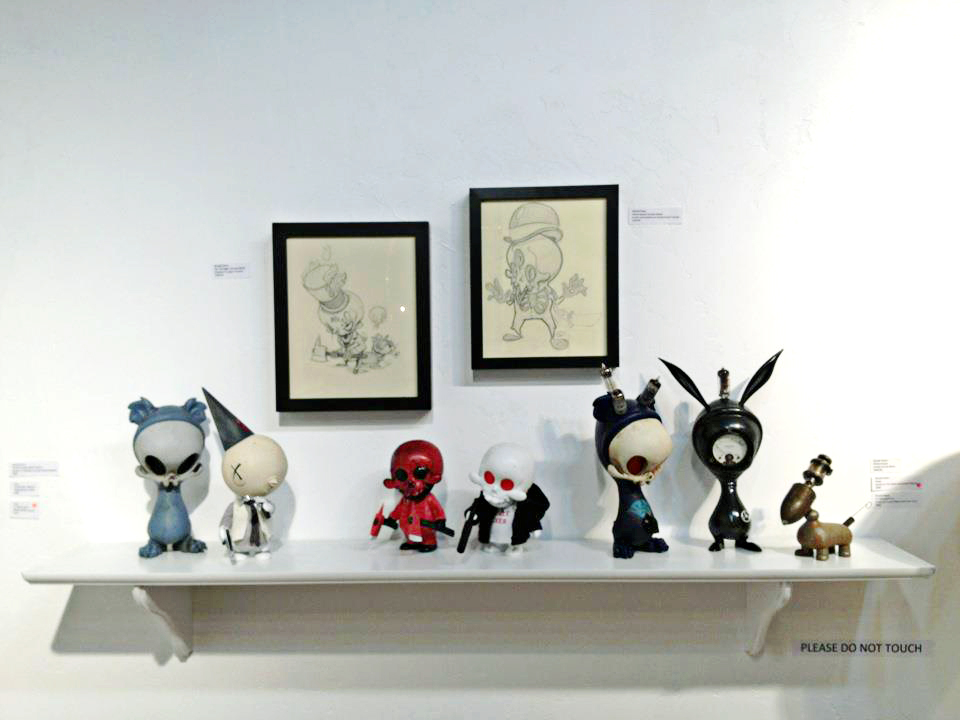 TRIGGER opened with BANG yesterday at Stranger Factory and, fortunately for us, FERG and shop minion Mikee were able to secure us some snaps while amidst the flurry of setup!

We all knew this would be a show that would set the bar for 2012 and now we have the pics to prove it. A melange of 2- and 3-dimensional works, TRIGGER is a showcase of some of the most dynamic, intriguing and downright unusual customs to date from FERG and Brandt Peters. We’ve got sex, we’ve got violence and even some mad scientist goin’ on up in here!

ABQ localites, the show’s on ’til the end of the month — stop by and see it for yourselves! Mailing listers, all will be revealed tomorrow (the 8th) when the preview goes live at noon PST. You’ll have a day to drool over everything and the email request period opens Monday (the 9th) at noon PST. Good luck to all — click through for a full photo gallery below!

END_OF_DOCUMENT_TOKEN_TO_BE_REPLACED

Following their romp in Austin last week with Clay ‘FERG’ Ferguson, the CP film crew returns with a profile from the other side of the TRIGGER line: Brandt Peters! In anticipation of the show’s opening, Kyle and Amie (aka Kamio) recently dropped by Stranger Factory with cameras a-blazin’ to reveal just what makes the CP ringleader tick. Enjoy it (and the funny childhood stories)!

TRIGGER is on view through Jan. 30th at Stranger Factory. 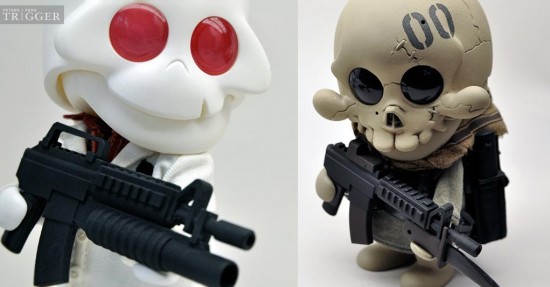 FERG has more pew-pew for our peepers with this latest pair of pics for TRIGGER. As he puts the finishing touches on his previously-revealed ‘Desert Trouble’ custom, he also offers us a first look at Chipp, who’s decked out in some slick Scarface duds. A week and a half to go until the FERG and Peters posses toe off at Stranger Factory!

The preview period for local collectors kicks off opening night (Jan. 6th) until Jan. 8th. Mailing list folk, you can expect the preview to hit your inboxes on Jan. 8th (there will be plenty left over for you, promise). The email request period opens MONDAY, JAN. 9TH AT NOON PST! Good luck! 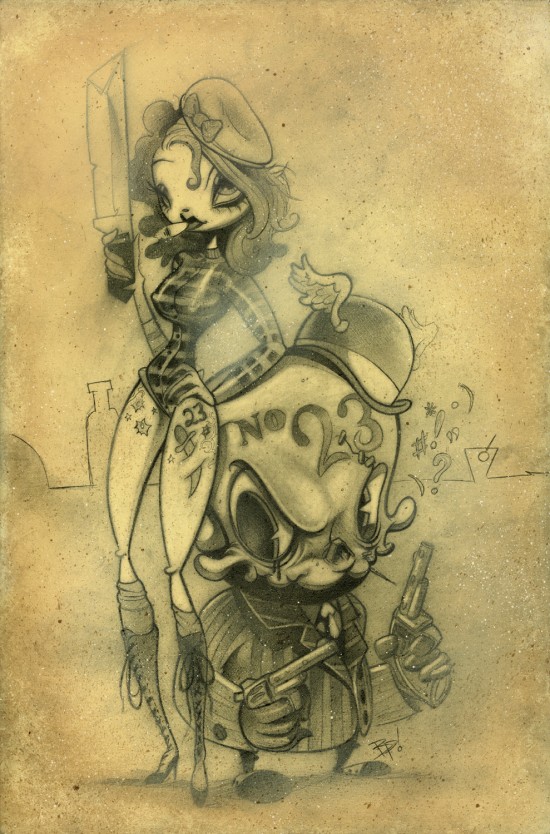 Gangsters and pin-up girls collide in this debut TRIGGER teaser from Brandt Peters!

We’re talkin’ a little Bonnie and Clyde hotness mixed with the smarmy tact of Tony Montana with Elvira. These two will take you to the cleaners and be it blade or barrel, the wise will avoid being at the end of either.

Trouble Couple: 23 is a 12” x 18” mixed media piece on wood panel … a delectably dangerous reimagining of the badass and Burlesque, Squadt and Circus … it all be brought’n here! TRIGGER opens Jan. 6th at Stranger Factory!

The CP film crew recently hit the road to pay a visit to Playge mastermind FERG, as he prepares for next month’s TRIGGER exhibition!

In this rare video opportunity, fans get a first-ever, intimate glimpse at FERG’s creative process. Join Kyle and Amie as they explore FERG’s studios, peep one-off test figures and come face-to-face with his army of custom Squadts soon to be drafted to the Stranger Factory showdown. Folks, it’s gonna be a good ‘un! 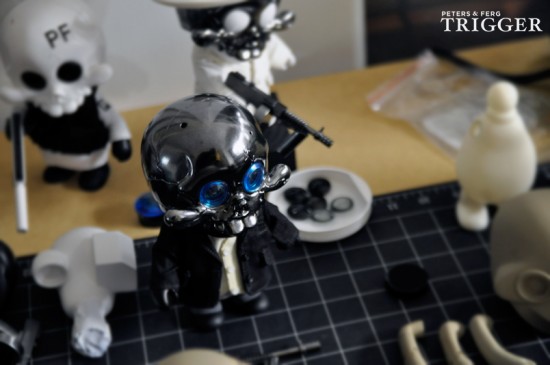