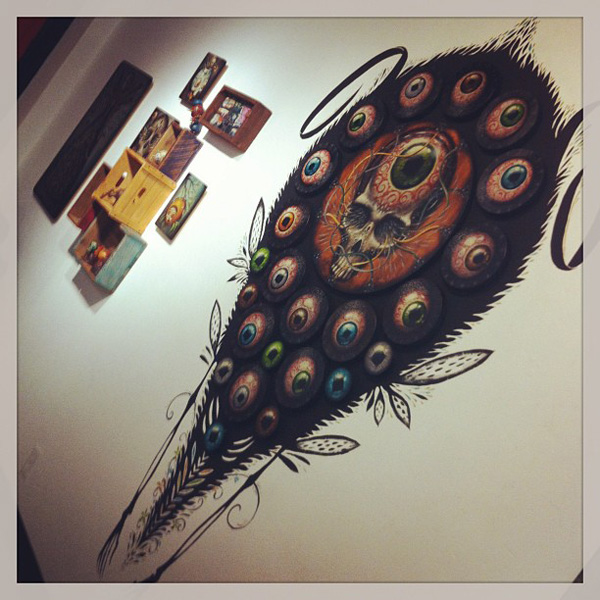 The art is hung, the shelves stocked, walls painted, and the good times have already started!

Opening tonight, Stranger Factory is thrilled to present three concurrent solo exhibitions by Jason Limon, Leecifer, and DrilOne. Each of these artists brings a unique talent and style to the gallery, and we’re thrilled to be able to offer new works from all! The opening reception is at Stranger Factory on Friday, February 1st from 6 PM – 9 PM. 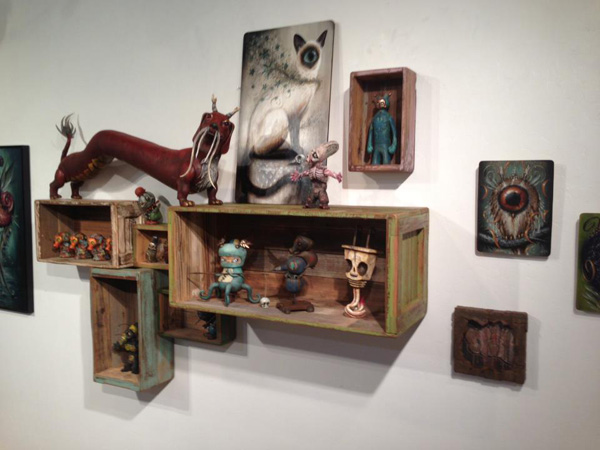 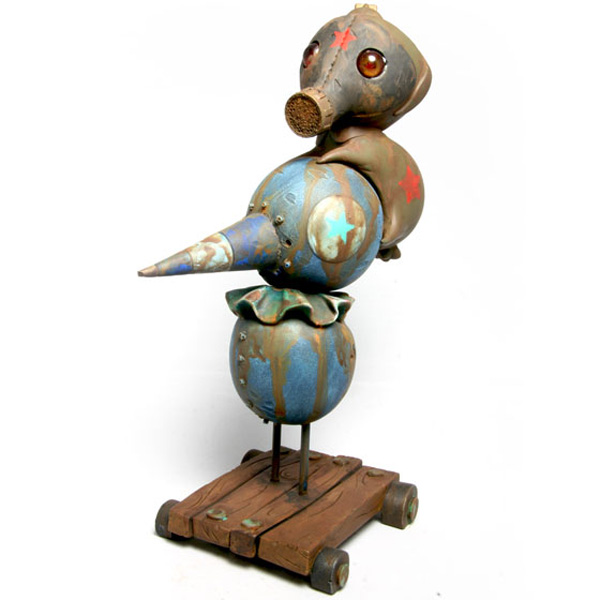 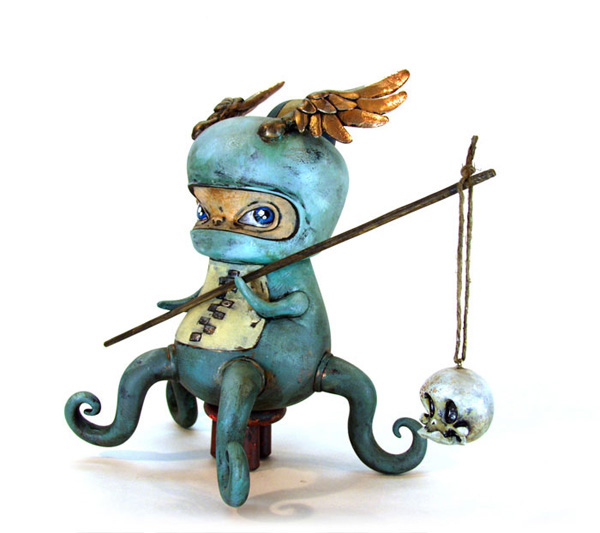 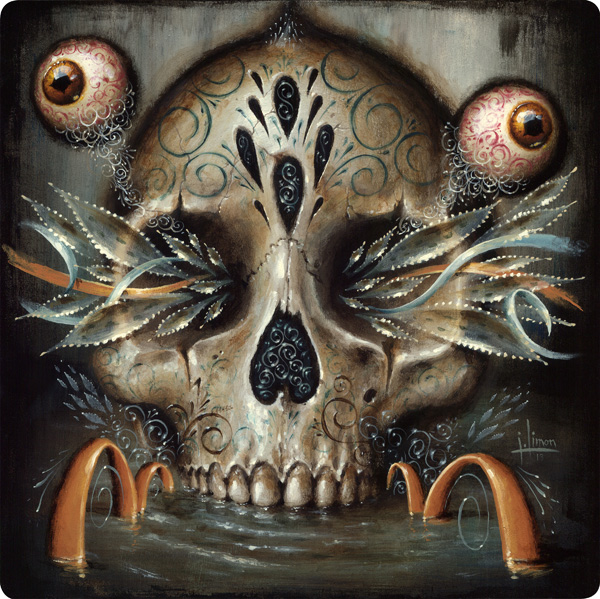 By now, we all know that Stranger Factory is beyond excited for the three solo exhibitions by Jason Limon, DrilOne, and Leecifer opening this Friday, February 1st. While the walls and floors are being adorned with all the amazing work, how about we show you one last glimpse?

Above we have the original painting Hindsight for Jason Limon’s “Foretell”. 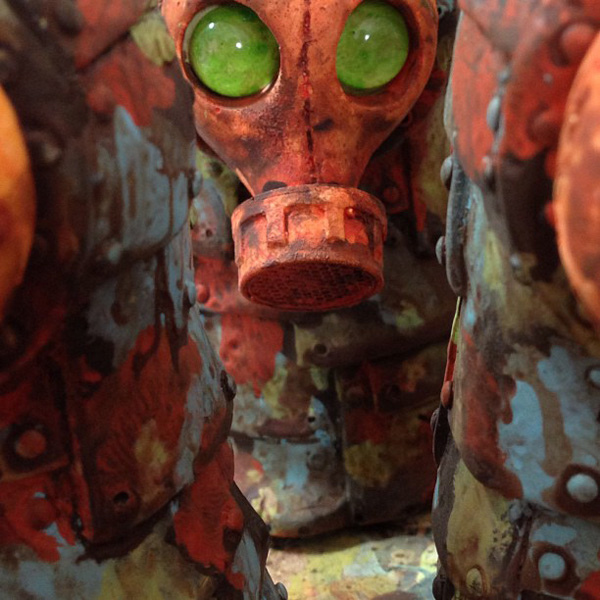 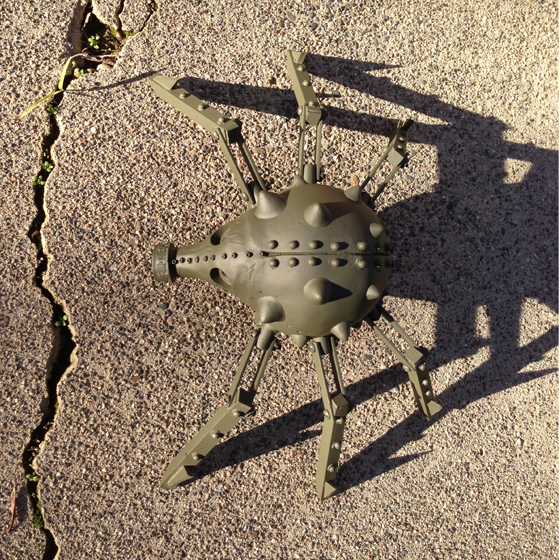 Ready to march into Albuquerque, Dril has created a run of 4 custom Drones which are part of his “Empty World” exhibit. Also shown is a gorgeous, incredibly customized DrilOne version of Jason Limon’s figures! 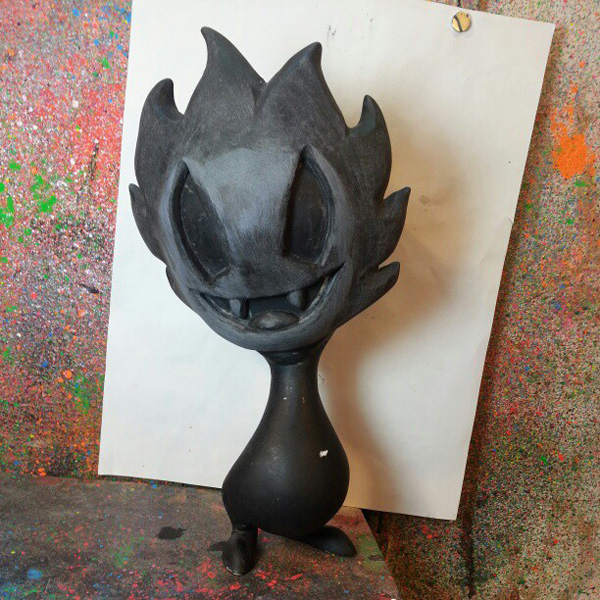 For Leecifer’s “Long Dogs“, a custom Honoo Skelve will be showing off a devilish grin to warm your hearts. 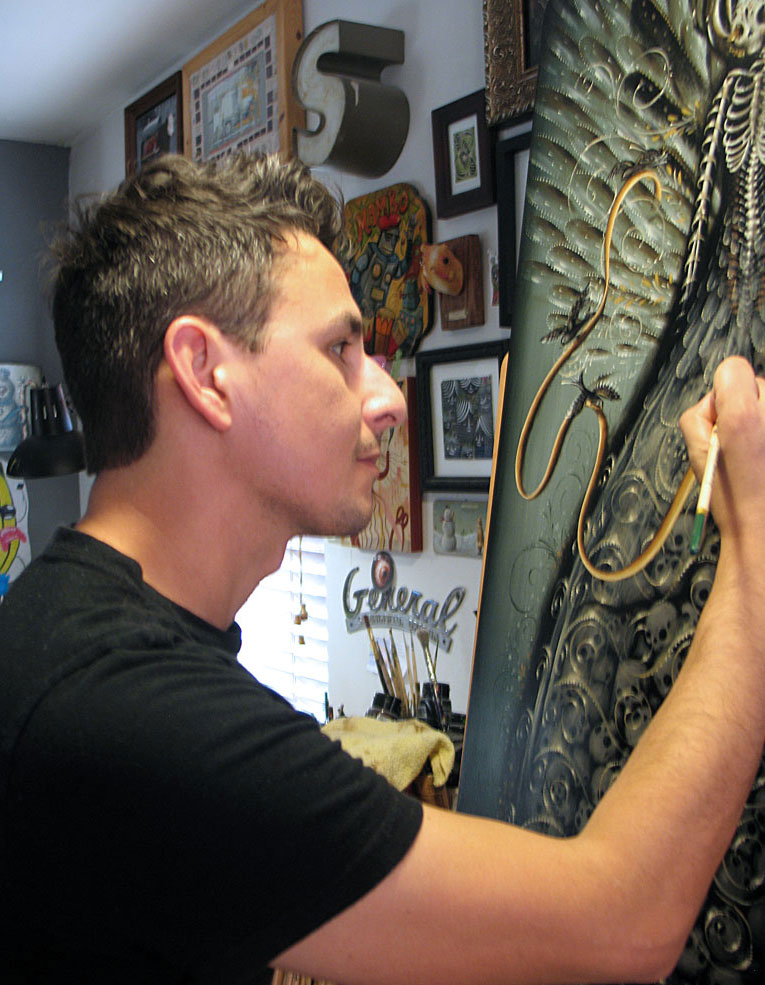 A regular at Stranger Factory group shows, Jason Limon is one of my favourite discoveries of the last couple years(yes, everyone else discovered him first. STILL.). He’s a really wonderful person, so I was happy that he could take some time to chat about his show opening at Stranger Factory next Friday. Jason is one of the shining stars of this scene – he’s super friendly and engaging, massively talented, and Brad and I also agree that he’s good looking.

1. You’ve been collaborating with DrilOne on some 3-D pieces lately, and we’re totally delighted at how well your styles mesh together. How did the start of the collaborations come about? Can we expect to see more of those fantastic rusty Limon-ey pieces for this show?

LIMON: I met Dril at Gallery 1988 in San Francisco late 2009. I had a group show there which he came out to and we were able to hang out a bit. We had communicated on and off since then, but last year he asked me if I wanted to work with him and the guys at Dragatomi at their SDCC booth. So we started to plan out some collaborative dimensional pieces. I had collaborated on a few (two-dimensional) paintings with other artists but never in 3D form. So I was a bit nervous but excited about it at the same time.

Together we decided that I’d send him one of my “Ollie’s” to work on. I shipped off a blank and a few weeks later he sent some progress shots of what he was doing with it. Once I received the piece back and saw it in person I was blown away and eager to finish it off with a little more sculpting and painting. We were both real happy with the end result on that one figure and talked about doing more.

For this show I really felt the urge to paint on panels so I didn’t get to do much in the ways of 3D with him. I did mail Dril a box of my blank resin figures a few months back. He has shared some teaser pics of what he’s done with them and they are looking amazing!

CP: Look at these gorgeous Dril customs of Limon’s resins! Aaaaa…I can’t wait until next Friday. 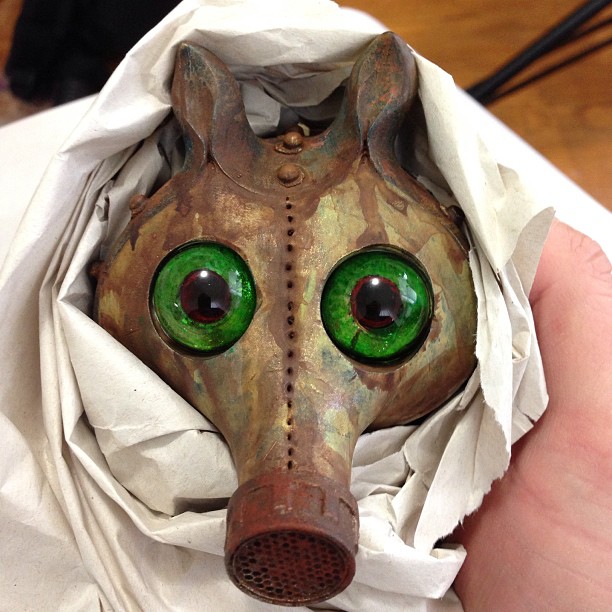 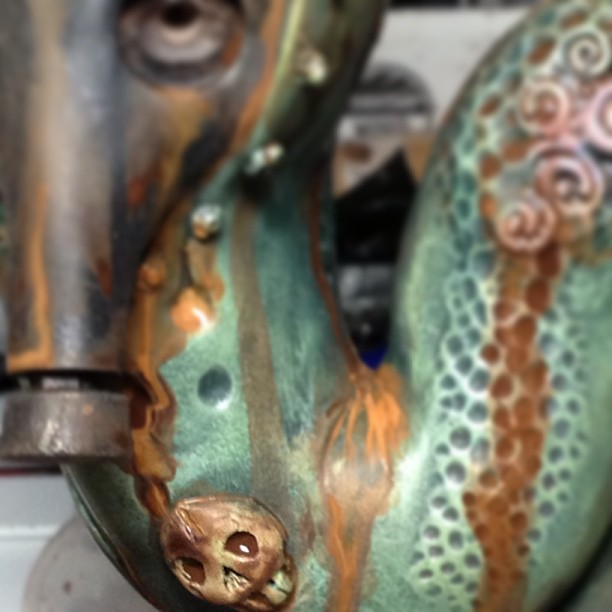 2. These giant(and gorgeous!) eyes you’ve been painting and sculpting have been becoming more prominent in your work over the past year, and they seem to be out in full force for this show. Tell us more about them!

LIMON: Yes, I’ve been making lots of eyeballs for this batch of paintings. For the past few years I’ve been telling a story with my images about how plant life overwhelms the planet and makes a shift within all other living beings. The vegetation starts to infect and change the population in order to balance things out. For this show, I was thinking of an end to the story. At the end, human life no longer exists yet there are so many new species and creatures that have grown from us and all other living things. Since there are no longer people around to see these things I imagined a way where all these eyes could be there in this time to show us. 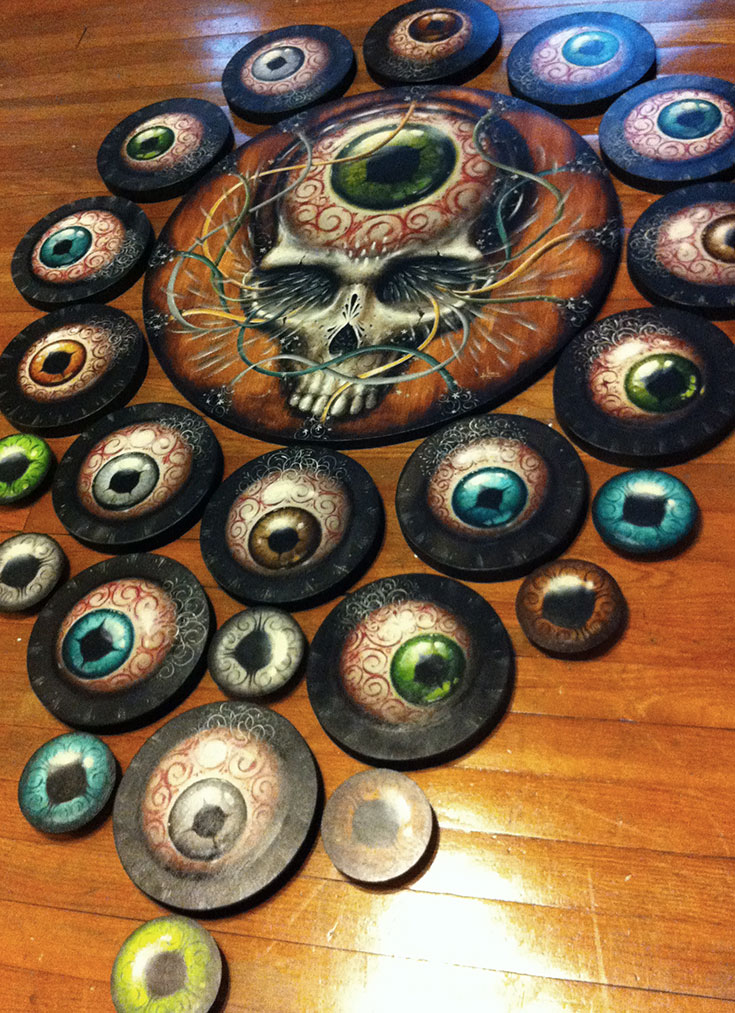 LIMON: One of the pieces will consist of twenty four panels with eyeballs showing us a glimpse into a time that we are unable to see. I wanted to create these paintings to draw some sort of conclusion to this story that I’ve been creating so that I might be able to explore other ideas and stories.

3. What are you most excited about in your body of work for this show?

LIMON: I’d have to say that it would be the multi-panel piece I just mentioned. I normally keep a painting contained to one panel or canvas. I enjoyed developing the pattern of this one and figuring out how to make it one cohesive piece, but yet could be taken apart and make sense individually as well.

Thanks for chatting, Jason!

Hope you enjoyed that small glimpse into Jason’s marvelously creative brain! And – here is one more picture of Jason and his cat Linky, who he adamantly insists that he is not sitting on.

And if you absolutely cannot wait for the show preview to get a hold of some amazing Limon work, we’ve got his Candy Corn Ollie from the Bewitching II show up in the store right now! 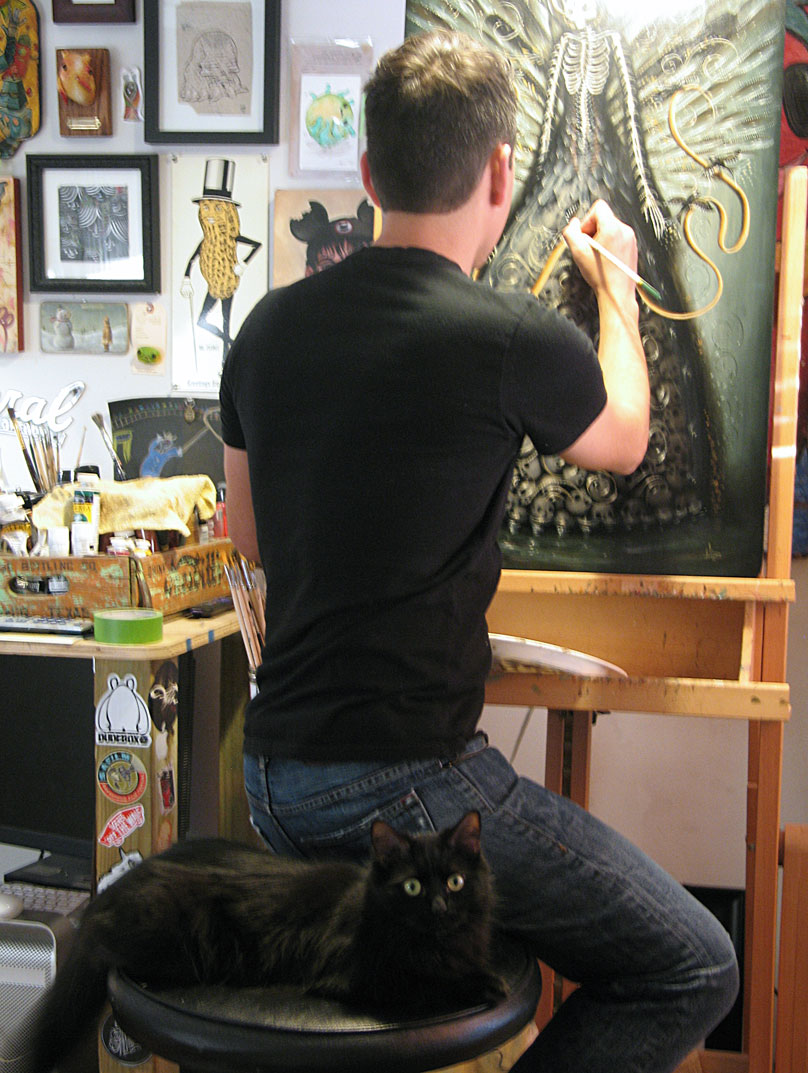 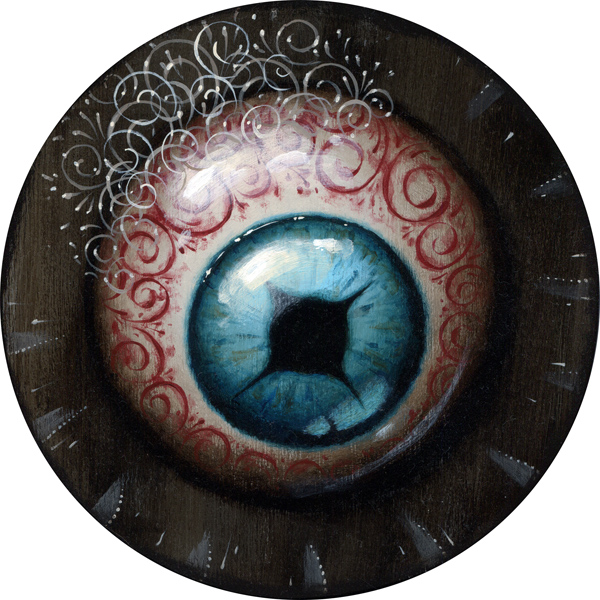 Something has definitely caught our eyes with Jason Limon’s upcoming exhibit “Foretell” at Stranger Factory this February. Jason appears to be creating a multi-panel piece that incorporates many foretelling eyes encircling a centerpiece skull that harbors a very omniscient third eye. Each panel even integrates the various vastly different iris colors we see in nature. And I may be wrong here, but it looks as if once this is properly mounted, an eye will follow you wherever you are in the room. I think Rockwell foreshadowed this with his song back in 1984, and we are very much ok with these eyes watching us. 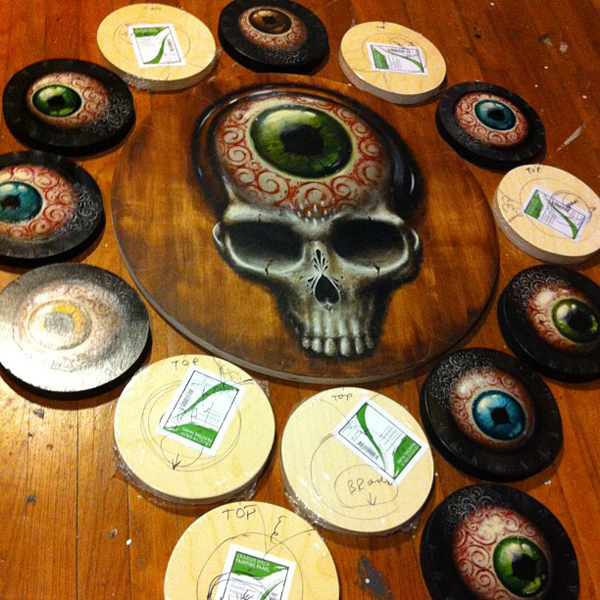 More eyes and progress pics under the cut:

END_OF_DOCUMENT_TOKEN_TO_BE_REPLACED 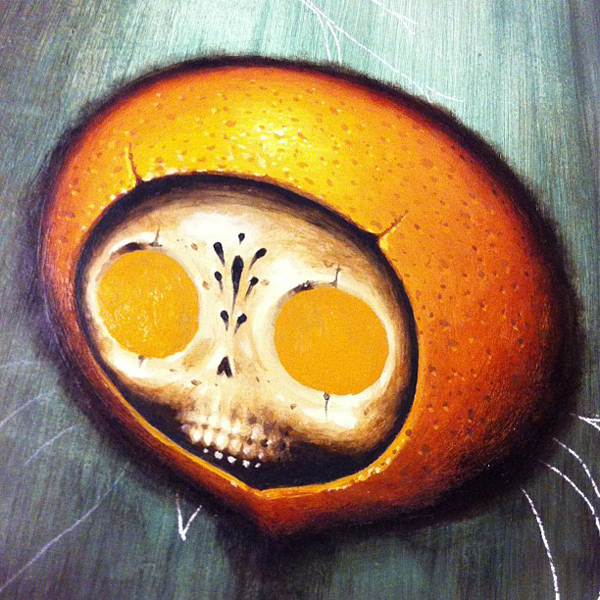 We announced three solo exhibitions last week and now we see Jason Limon is hard at work getting ready for his exhibition, “Foretell” at Stranger Factory, February 1 – 24. All the work is coming together, and we are lucky enough to see many of the pieces evolve. Foretell will “offer a glimpse of what’s to come through the foretelling eyes of afterlife”, but the images Limon keeps teasing us with offer a glimpse at the amazing process each piece requires. Here, we have two examples of the developing works in progress with a citrus flair and a stump full of life. We can’t wait to see all the finished work! 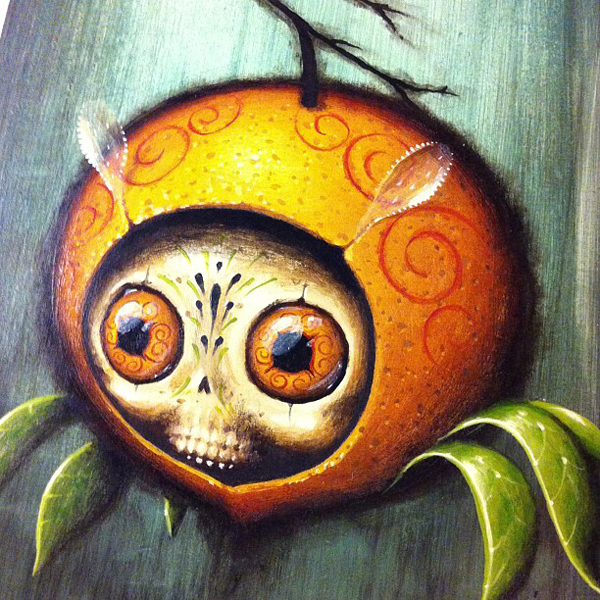 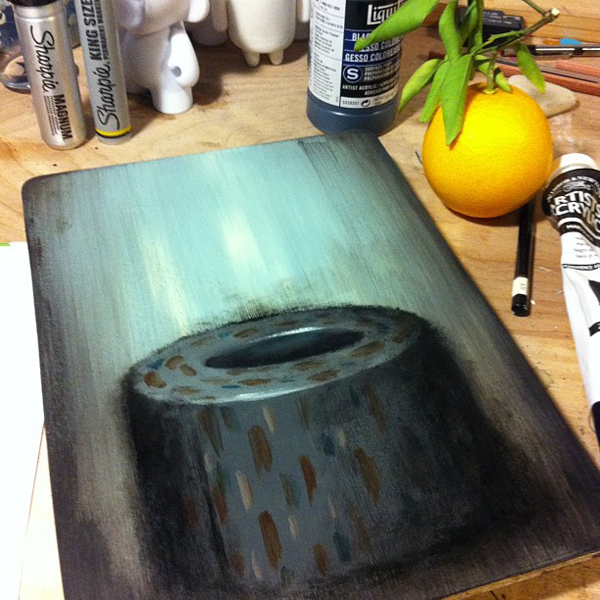 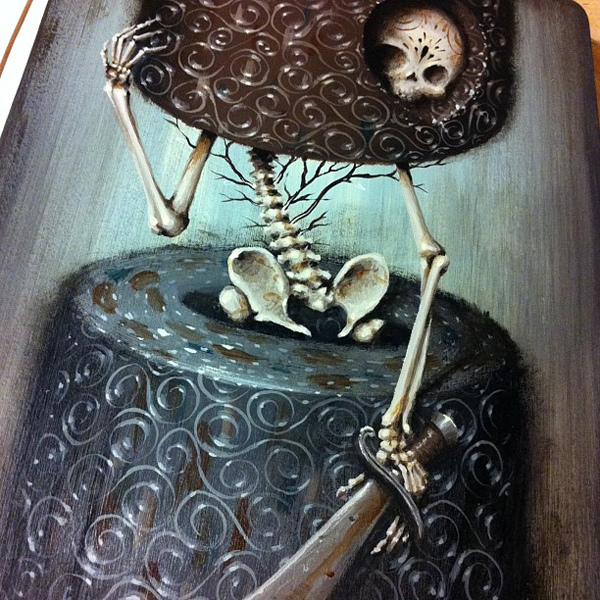 Stranger Factory is excited to play host to three concurrent solo exhibitions by Jason Limon, DrilOne, and Leecifer! Each of these artists brings a unique talent and style to the gallery, and we’re thrilled to be able to offer new works from all! The opening reception is at Stranger Factory on Friday, February 1st from 6 PM – 9 PM. DrilOne’s exhibition, “Empty World“, will showcase Dril’s signature style of distress and decay as he tackles his interpretation of a post-apocalyptic landscape. Utilizing his familiar forms of 3D signage, paintings, original sculpts, customized vinyl toys, and other mixed-medium assemblages, DrilOne offers up a glimpse of his view of a world gone dead. Leecifer’s “Long Dogs“, presents the artist’s unique vision of the world unnoticed as customized vinyl toys, original sculpts, and paintings. Encountered as seemingly ordinary plants and animals hinting at an impossible intellect or ancient wisdom. Seen from the corner of your eye, a flash of golden scales is revealed to be but a Tabby’s fur; a serpentine shadow solidifies into one from a dachshund, improbable wings on a frog. Sometimes the glimpse becomes the knowing smile of a Boston Bulldog that, in passing, might have had catfish whiskers, or maybe even a turtle with too many heads. Or the sense that, even in times of harshest trial, there is a powerful presence shepherding and guiding you. This is the gift of a long dog. Possible dragons and unrecognized conduits of wonder and magic, hiding in plain sight. Jason Limon’s exhibition, “Foretell“, is based on visions that can’t be seen by living human eyes. The paintings and ideas will portray our planet after we humans no longer live, but only remnants of us exist. Jason questions what will grow from us and around us. New creatures breath life into what we were and grow from what we left. Jason’s paintings will offer a glimpse of what’s to come through the foretelling eyes of afterlife. 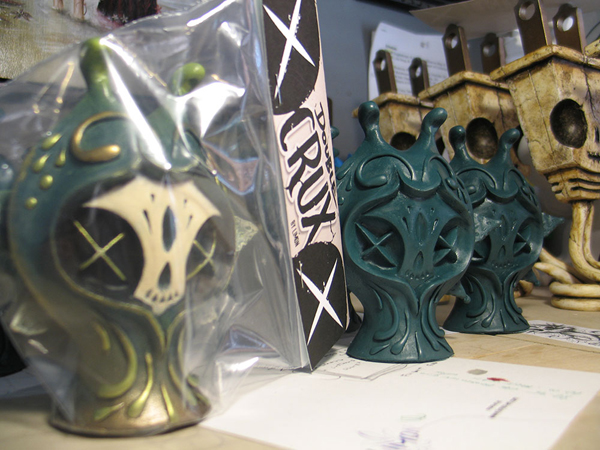 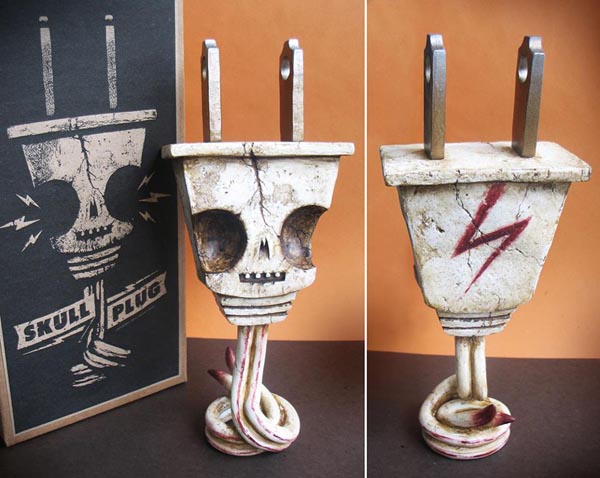 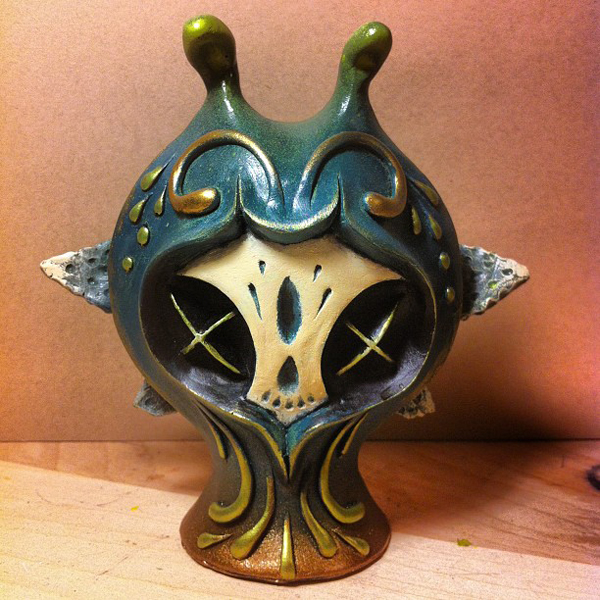 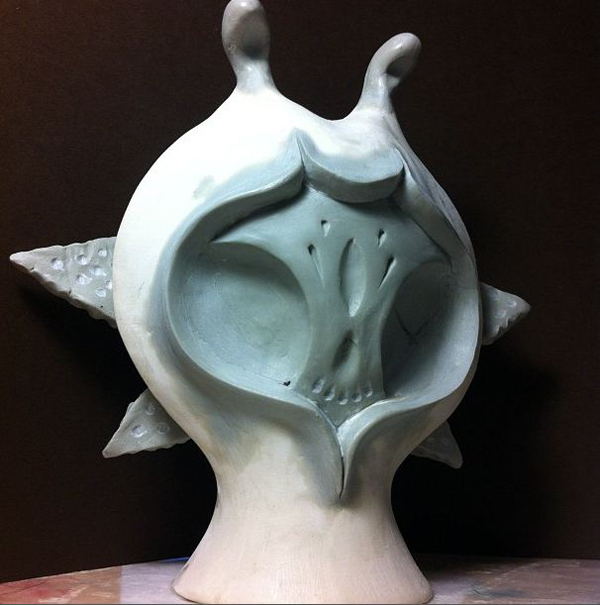 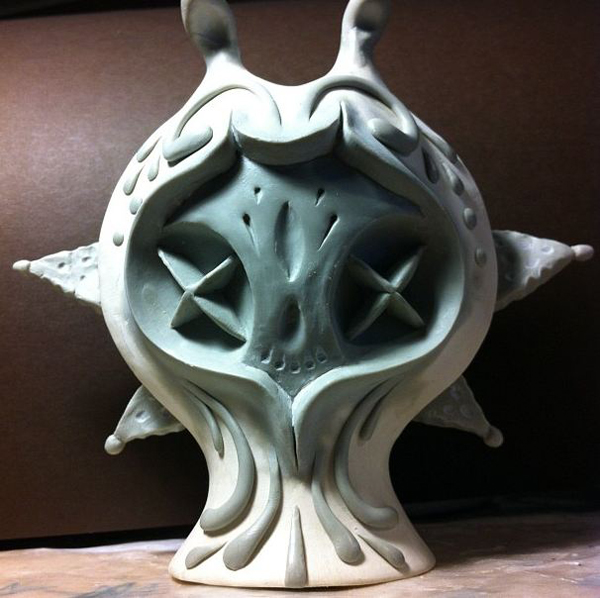