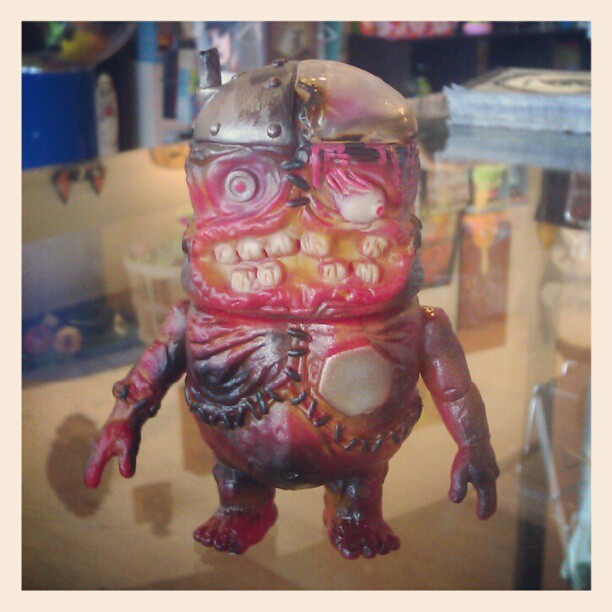 A day late but not a buck short, Mikee’s Mail Day is still alive and running folks! Bewitching had me firing on all cylinders and I had no time to open my mail. It was very painful to stare at a bunch of fun boxes and not get to play. But now is the reckoning, I am gonna spend all day tomorrow playing with new toys … be jelly!

This week’s mail piece is the first-ever Mecha Cadaver Kid from Splurrt. Now if you’ve read my column before, then it’s nothing new to you that I love Splurrt’s stuff and the Cadaver Kid is among my Top 5 all-time favorite toys! So when Joe Splurrt decided he needed a new head with a big soggy eyeball, I cried tears of joy.

Now here we are, and the Mecha Cadaver Kid is out and in my grubby hands: the new head sculpt is awesome! Look at the picture folks, you see that clear vinyl? That’s a flippin’ brain plate cover! You can see his BRAIN! Seriously, I can’t stress how incredibly awesome that is. Rumor has it that Splurrt is going all-out for NYCC, so hopefully we got some more Mecha CK heat coming our way! 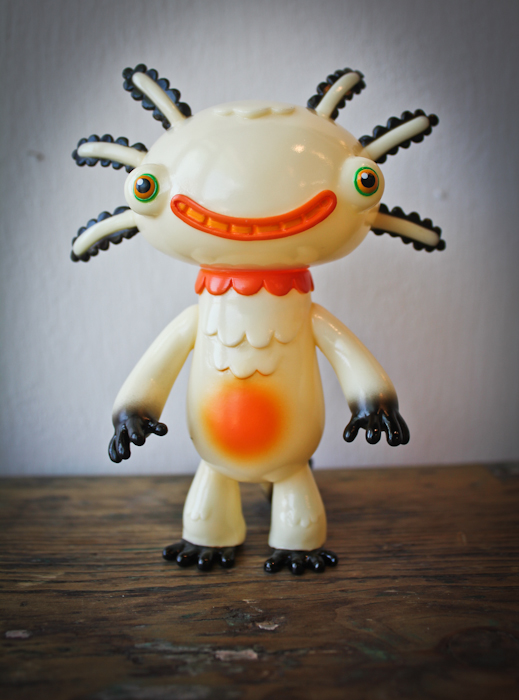 To start off, let me say that the term “spirit animal” gets tossed around a lot at Stranger Factory. Some of us know our spirit animal no problem but others are still searching. I am of those others. I bring this up because the Wooper Looper (or axolotl) is quite the creature to behold: the term “Wooper Looper” is mainly used to explain a group of salamander indigenous to the areas around Mexico City (or so Google has lead me to believe). Now if you had asked me if I found it possible to relate to a salamander at some point in my life, I don’t think I would have even taken you seriously. Until Gary Ham made a toy of him, that is.

Designed by Gary and sculpted by Chauskoskis, the Wooper Looper is quite the impressive piece of sofubi. The extensions from the head alone create some very interesting production challenges. That said, the lengths the factory went to preserve the charm of Gary’s character really helps make the piece shine as a whole. The figure serves as a great example of the playful side of sofubi in general. 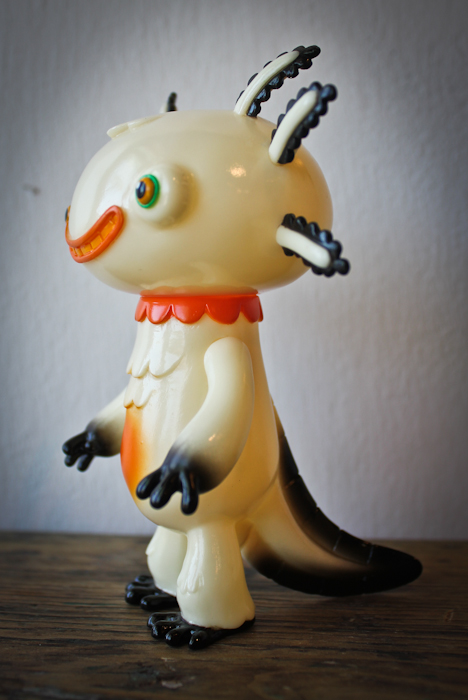 The main feature I find so endearing about the Wooper Looper (besides that cheesy grin) is the choice in articulation. I really enjoy that the figure has a solid body piece and the tail is used to create a firm anchor so the toy is guaranteed to stand. Also the arm articulation really helps to sell the fun idea behind the figure: he reaches out like he really wants to give you a hug!

All in all,  the team of people that made this toy possible all deserve kudos. The toy is a definite gem and something I will happily display on the shelves in my house.

The cute shelves. Not the creepy ones.

The Stranger Factory exclusive Wooper Looper is an edition of 33 pcs and retails for $68. The figure releases on Tues., Oct. 9th at noon PST via the Bewitching Preview. Want to catch one for yourself? Get the full scoop here! 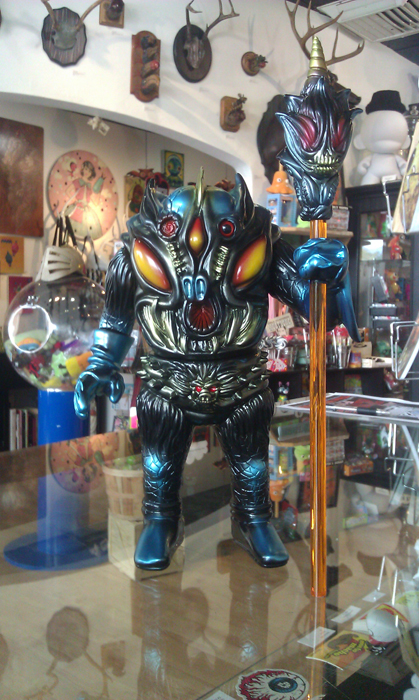 Sometimes you have a mail day so good it brings you to tears. Standing behind the counter, weeping and worshipping a new god, while customers stare at me confused. These mail days are few and far between. But yesterday was one of those days.

If you are in the know in the Kaiju scene, you know that one man towers over most with his top hat and trademark evil grin: Paul Kaiju. He is a beast, pure and simple. His works are this amazing blend of sick and elegant. The Pollen Kaiser is a huge example of how great Paul’s work truly is. The Pollen Kaiser stands 10″ tall and around 12″  with the staff. This particular version was the recent Toy Art Gallery factory paint release and is a great lure to getting people to look back at some past Pollen releases. Seriously , the handpaints from SDCC this year still haunt my dreams. That and I would sell my mother into slavery for a Mockbat … any takers? 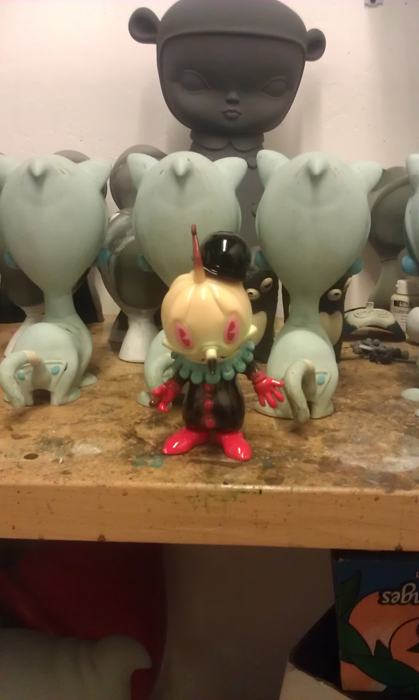 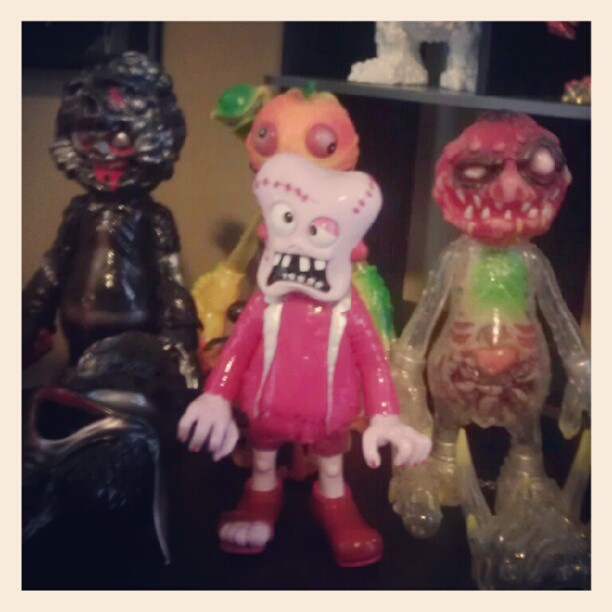 This week is kind of a cheat. I have many things on the way but no mail this week (so bummed!). Luckily I have these awesome bosses who brought me back a surprise from Paris, so Mikee’s Mail Day continues and the toys keep coming in!

This week we have a Fungah by the almighty and unstoppable Cure. Cure are based out of Japan and make some of the best vinyl goodies out there. The Fungah here is a good example of the fun  side of Cure, which would also include their minis called Suck Flies. Reminiscent of a monster we’re familiar with, this specific version is done in the Frankenberry colorway! Nothing like vinyl toys and cereal, it takes me back to my days as a mischievous youth. Cure also make the amazing fellows surrounding our pink friend called Boogie Men. But I feel we should save them for later; something tells me a story about them is on the way… 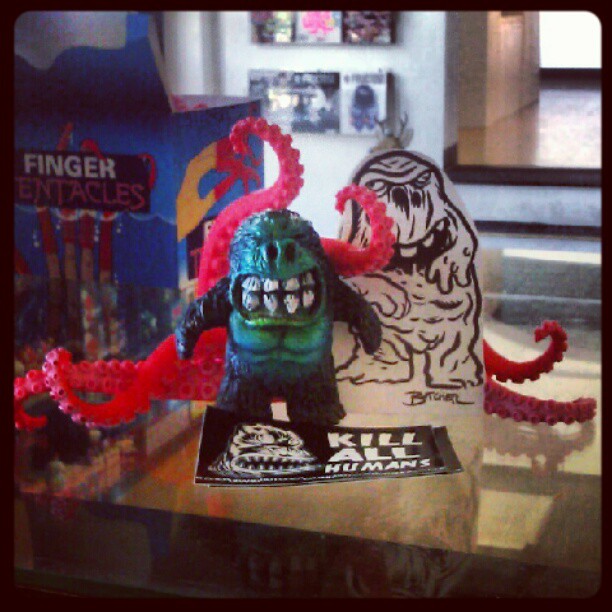 Oh mail, I heart you so much! This package actually came right after I finished writing last week’s article, but it’s so much fun it deserved the spotlight.

Let me start by saying that I am picky when it comes to collecting resin. I love my resin pieces, but I tend to prefer vinyl as it is more of a toy and less of a statue. That said, this piece is one of those exceptions I was very glad to make. Created by Butch Adams, The Grinder is a pretty awesome piece of resin. Butch’s colorway choices and penchant for simple but intense reminds me of old gross-out toys I loved when I was little. Add to that the amazing sketch and super awesome “Kill All Humans” sticker, and I am sold. A great resin piece that promises I will be keeping an eye on Butcher Brand. 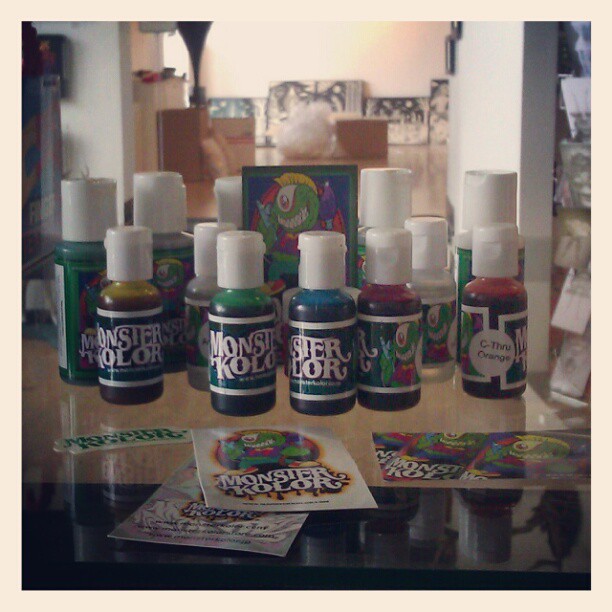 Well another week has passed over here at Stranger Factory, and admittedly, it was a little slow for me mail-wise. That said, I did get one package I feel like geeking out over:

This week’s mail day is brought to us by the amazing, unstoppable beast known as Monster Kolor! Monster Kolor is a company that lives to make the best paint they can for toy customizing, be it vinyl, resin, PVC … whatever your little twisted heart desires. Recently I picked up some Monster Kolor for my airbrush gun so I could do a little recreational custom work. I’m getting the hand sharp for some projects in the works and have to be able to do “gruesome” just right! Don’t think it’s all airbrush though; they also carry brush and aerosol paints to help give your creature just the right finish or feel.

When it came in Brandt and Kathie made me promise not to sit in the house and spray it. Also they said I have to wear a mask while I do it from now on … safety first kids! 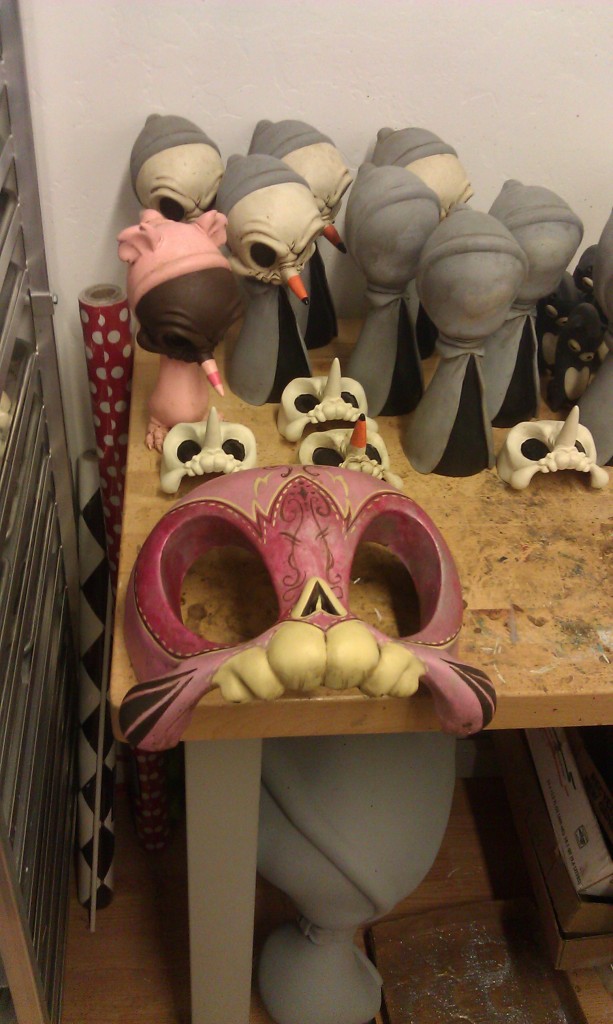 So much lucha, so little time … 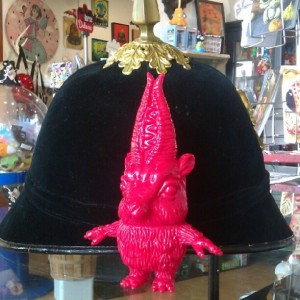 Hello CP fans! For those who don’t know, my name is Mikee and I work behind the counter at Stranger Factory. It’s an amazing job and to be honest I got it because of my one true love … Toys! Some would say I have a problem, others would exploit that problem for their entertainment! So in honor of the latter, we bring you Mikee’s Mail Day! I get a lot of packages and we are gonna start showing off some of the fun goodies I collect and why I collect them.

This week being the first, I opened a great package. Today I got in my Splurrt Usir. Usir is the third vinyl character release from rebel toy company Splurrt. Following in the footsteps of his prior releases, while still departing for a slightly different tone, the Usir is just plain evil! Not going to lie, Splurrt is one of my all time favorite toy companies and this is a prime piece of Sofubi to use as an example why. The Usir is a new head mold but the body is actually from a previous Splurrt release called the Diggler. This type of adaption through simplicity is why Kaiju and Sofubi are so amazing! Granted Mattel does this with He Man parts but it’s not because they have to and more because they prefer to cut cost. We Toy Rebels live and thrive on a budget, so finding ways to make something new out of something existing is what this is all about.