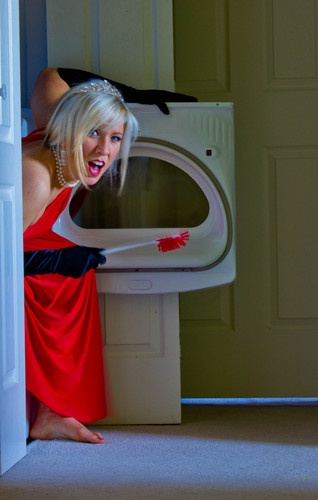 Valency, one of our new Circus Posterus artists, has been a fixture at Stranger Factory, and her wonderfully whimsical art and ridiculously loud personality is a true Albuquerque treasure. Valency’s brilliant faux-taxidermy sculptures are an exploration of natural history meets surrealism, and we’ve been excited to see her collector base expand and her current body of work evolve into the fantastic display we have been hanging up on our walls right now.

However, she is sadly leaving us to join her family in London in just a few days, so please come to her show FAUNA, opening tomorrow, at Stranger Factory, to give our favourite fabulous lady a proper send off!

Of course, even in the mess of packing boxes and rolls of tape, Valency took the time to answer some interview questions about her upcoming show, her inspirations, and herself. Read on! 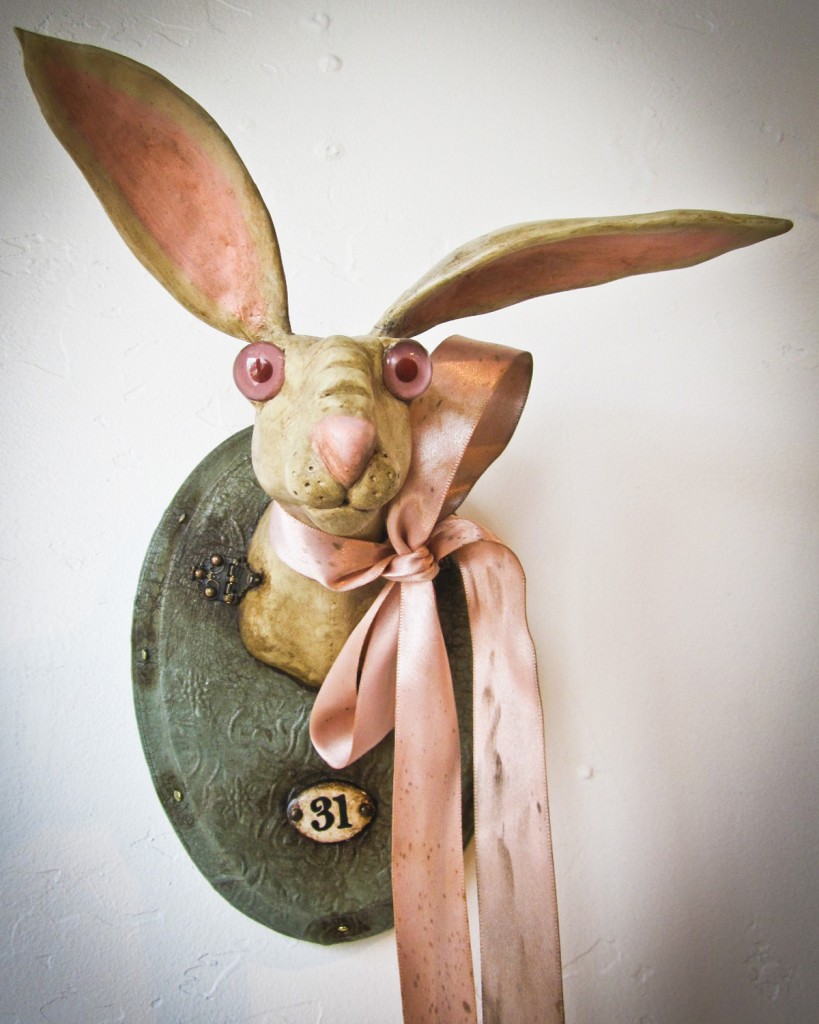 CP: You’ve told us this already, but please, let the rest of the world know where in the world a name like “Valency” came from?
After my mom had my two older sisters, who are 11 months apart, I came along four years later – being that I weighed 12 lbs., 2 oz. at birth, my mother was HUGE during her pregnancy and thought that I would FOR SURE be a boy – all of the baby shower décor & gifts were boy-themed. She had only been picking out boy names… when I popped into the world, she had to scramble for a suitable name – that week, a made-for-TV science fiction movie starring William Shatner was televised, and one of the female characters was named “Valency.” There has only been one individual who immediately knew the name of the movie when I told this story – and that would be the amazing Travis Louie!! (The movie is called The People)

CP: Tell us about Fauna! What does this body of work represent?
I have been called an ‘animal freak’ for as long as I can remember… I am luckily married to a very tolerant man who just shakes his head when I add to our ‘mini-farm’ of animals, which currently consists of four cats and one 4-lb. Chihuahua (it would be a much larger collection if we weren’t a ‘mobile’ military family). In my childhood, I had worm-farms, massive pillbug collections, ant farms, cats, dogs, and many varieties of lizards, birds, frogs, and rodents – I was definitely a bit of an Elmyra Duff, which was somewhat difficult considering I grew up in urban Seattle. Fauna is really a chance for me to let that part of me loose – each and every creature I create is absolutely so much fun for me! Giving them color and character and bringing them to life is my joy.

CP: Can you talk about the evolution of your art over the past few years? Has your time at Stranger Factory influenced your direction?
The first time I went to college, straight out of high school, I was a Physics major – my dad was a dentist and my uncle is an astronaut, so science is in my blood… But I was always drawn towards art, and rebellious young Valency decided to drop out of college and go to Beauty School instead. I enjoyed dabbling with that, but I was still unfulfilled. As my two sons grew up and needed their mom less and less, I went back to college, this time majoring in Art Studio. I explored every angle of art that I could, culminating in my 2011 graduation from the University of New Mexico, which included a honors thesis exhibition of 80 faux-taxidermy pieces. Looking back at that show, my palette was quite dark and muted – I think I was always fighting the ‘seriousness’ that art professors encouraged.

One year ago, I worked up my courage to approach Brandt Peters and Kathie Olivas at Stranger Factory. I knew I needed ‘more’ that what I learned at school, and I knew from attending at talk that Kathie gave to one of my painting classes that Brandt and Kathie had the advanced knowledge that I needed. I have learned more about art and the art industry in the year that I’ve interned with them than I learned in five years of college. I have felt much more free to actually enjoy making my art, art that is colorful and fun and happy. Every critique, every bit of advice, every tip and trick I have gleaned from BP & KO is priceless to me!

(A Valency and Kathie Olivas collaboration, currently available in the Circus Posterus Store)

CP: Why is the Dodo your spirit animal? Are we going to see lots of dodos in Fauna?
Dodo birds were such a sweet, proud, funny animal – they were really just giant, fat pigeons who couldn’t fly. They really had no fear, and were used as entertainment for the sailors who would bring them on board their ships, and they didn’t taste very good – but nonetheless they were wiped off the earth in less than a century after they were discovered by humans. I always felt an affinity to their funny/tragic nature, and I just somehow always knew that they were my spirit animal. All kinds of strange coincidences have popped up as well, such as finding out that the Independence Day on the island of Maritius (the only known stomping ground of the Dodos) is on March 12th, which is my birthday! 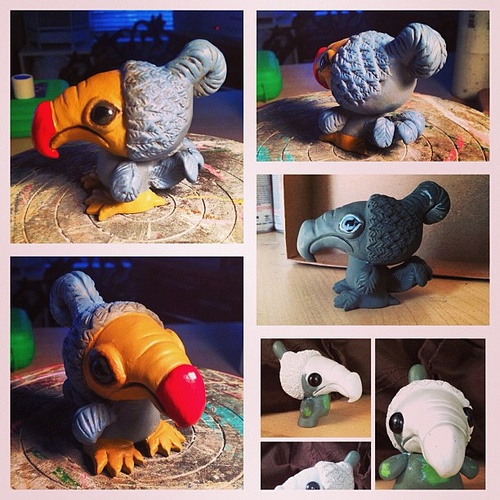 (Above, customized dodo by Valency!)

CP: What does taxidermy mean to you? Do you collect it? What else do you collect?
I have always been absolutely fascinated by taxidermy. My parents had some foo-foo friends growing up, some of them with formal libraries in their foo-foo houses, which included finely taxidermied safari animals. Being able to see zebras and giraffes so close-up was a treat, but I would mourn them as well – I am not a vegetarian by any means, but killing animals for sport distresses me. If you’re going to eat it, by all means, kill it humanely! Mount those antlers! But killing an animal on safari just for a trophy mount just seems so unnecessary. So, no, I do not collect taxidermy art myself. I see my faux taxidermy heads as a suitable replacement for people who seek taxidermy without the trauma…

I have currently been collecting pieces of fabulous artwork that I have had access to from working at Stranger Factory. I now have original pieces from Brandt and Kathie, as well as some of my other favorite artists: Travis Louie, Chris Ryniak, Amanda Louise Spayd, Shing Yin Khor, Dok A, Jason Limon, Doubleparlour… My wee art collection serves as wonderful inspiration as well!

CP: Have your travels (and somewhat nomadic lifestyle) influenced your art? Where is your favourite place in the world?
My travels have definitely affected me as a person, so it would in turn have to have an influence on my art. My favorite places we have lived are Albuquerque, NM and Newmarket, England (where I will be returning to mid-June) – but my absolute favorite place in the world is Stranger Factory (and I’m not just saying that for brownie points!!)

CP: What is your favourite Natural History Museum in the world, and why?
With all of the fantastic free-entry museums in London, I was able to spend a lot of time at London’s Natural History Museum when we lived in England from 2000-2004. It was really the only museum my young sons would tolerate, and with its immense size, it was a great place to tire them out!
I haven’t been to any of the other ‘big’ natural history museums, but I grew up just a few blocks from Seattle’s Pacific Science Center, which I loved, and every summer when I visited my grandparents in Oregon we would go to OMSI (Oregon Museum of Science and Industry).

If we’re talking creatures, though, I must say my absolute end-all favorite zoo-type-place in the world is Monkey World in Dorset, UK – It’s a zoo with ONLY MONKEYS. And apes. And lemurs. TONS of them! They took the best animals in the zoo and just have loads of them – they are all rescued animals, for the most part, and it is just wonderful to see. If you come and visit me in England, I will most likely try and drag you there.

CP: What are your current obsessions?
Right now, I am obsessing over these moving men not breaking or losing all of my stuff.

CP: We’re going to be so sad to see you go, but we’re really excited for the new things on your horizon! What are your plans for the rest of 2013/2014?
I am excited to be participating in the upcoming Bewitching III show in October at Stranger Factory, and I have a few other things in the works there! I am working on a much-in-demand dodo bird sticker (yeay stickers!) and I am hoping to fly to Pasadena in November for Designercon. I am kind of in a state of flux for the next 2 months until my household goods (including my art studio!) gets to our house in England.

Valency Genis’ “Fauna” opens June 7th at Stranger Factory with a reception from 6-9pm. Valency will be present!