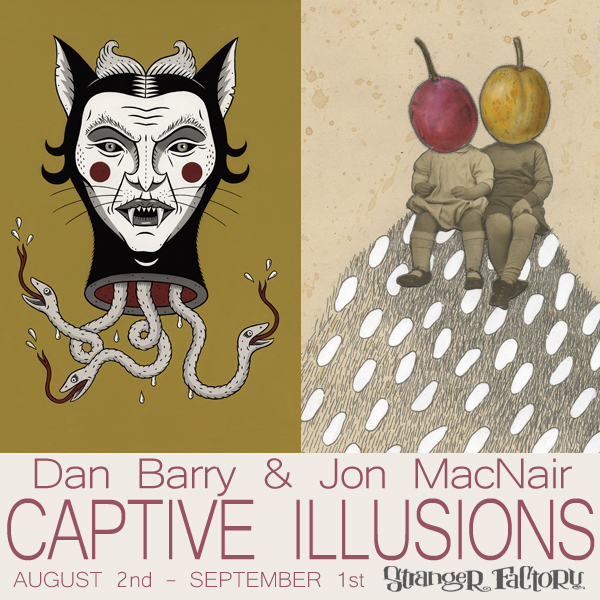 Captive Illusions features the collected image works of Dan Barry and the illustrative works of Jon MacNair. Together, the duo create a show that sends the viewer into surreal and playful worlds with characters that come to life in warm color schemes.

Jon MacNair was born in Seoul, South Korea and grew up in the suburbs of southeast Michigan near Detroit. He graduated from the Maryland Institute College of Art in 2005, where he earned a BFA in Illustration. The body of work he has created for this show is a deviation from his usual monochromatic ink on paper works. Employing color, to assemble an exhibition entirely comprised of paintings on wood panel, he focused less on narratives and more on straight-forward character driven works. Feeling illuminated in the new process, MacNair has taken a fresh view on the characters he has drawn many times before in monochromatic tones, enlivened and transformed with a fresh color palette. 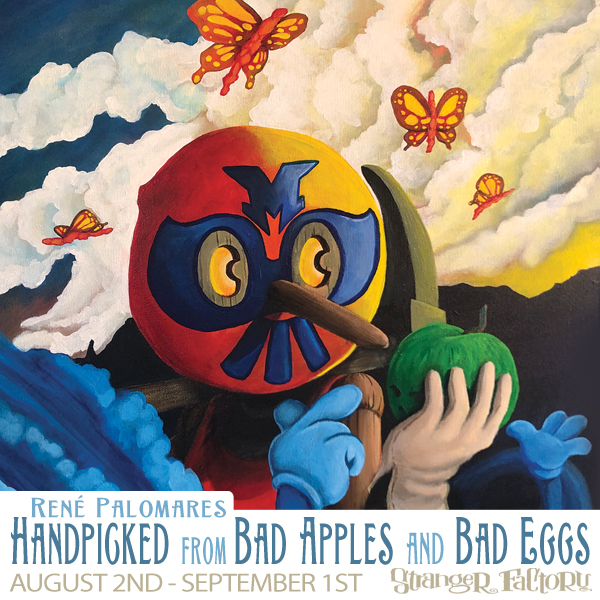 Stranger Factory is happy to present René Palomares in his first feature show at our gallery, HANDPICKED FROM BAD APPLES AND BAD EGGS.

Hand Picked From Bad Apples and Bad Eggs is a body of work that serves as a timeline from past to present. The works honor people and events that have been factors that has shaped Palomares’ life until now. Those people and events are represented in luchador versions that mostly consist of Palomares’ signature characters, The Eeep!, The Ghost, and Hollowmen. The idea of the luchador in his work serves as a beacon for strength, hope, and Mexican culture; But also, secrecy, disguise, and fear.

René Palomares was born in Las Cruces, New Mexico and grew up in the towns of Mesquite, Anthony, and La Mesa. He currently lives and works in Albuquerque, New Mexico. He has had the privilege to be able to explore his art while teaching both middle and high school. Drawing has always been comfortable medium for Palomares and as an undergrad in college, he began exploring paint. It challenged his color-blindness (which he prefers to think of more as ¨color-confusion¨). It was then that he fell in love with paint and all its forms. He has continued to explore the possibilities of paint in the style of work he currently creates.