Stranger Factory is proud to present a special mid-month event in March: A one weekend exhibition with legendary West-Coast (San Diego) toy designer and artist, Paul Kaiju, with an opening reception on Saturday, March 19th (from 6-9 PM, with the artist in attendance.)

Highly inspired by vintage Japanese toys/television, big screen Kaiju monsters, 1960s Sci-Fi, and old horror shows, Paul “Kaiju” is member to an extremely talented small group of industry leading toy artists that not only design, but sculpt, engineer, and self-produce their toys in Japan through a very rare “sofubi” (soft vinyl) traditional manufacturing process. Always the constant muse for the independent art toy industry, Kaiju pioneered techniques, customization, toy design processes (from color/form to function) and has been a major influence to most toy artists and has pushed the boundaries of toy beyond commercial application into new contemporary sculpture.

The artist will have a limited amount (a few dozen) of his hand-painted custom figures at the opening reception. It is a very limited engagement and will only run from March 19th-21st. Any available figures after the weekend, will be put up for online sale on Monday, March 21st. In person sales on Saturday will require a raffle ticket that will be distributed on a first come first serve basis, starting at noon Friday, March 18th through 5:30 PM on the 19th (right before reception). All sales on Saturday and Sunday will be in-person. No phone calls or emails will be accepted until the following Monday, if any pieces are still available.

The opening reception will be on Saturday March 19th from 6-9 pm with artist in attendance.

This mid month pop up exhibition will remain on display until March 21st (if works are still available after weekend). 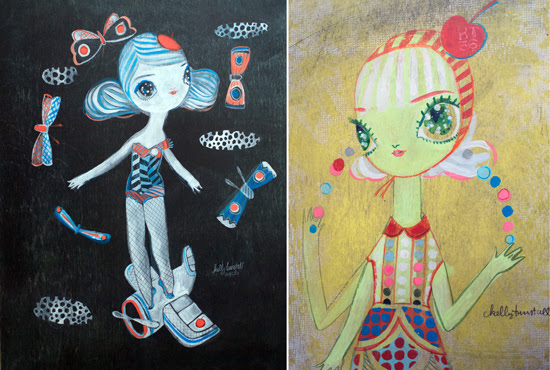 San Francisco based artist Kelly Tunstall renders stylized female figures and their adaptations to environment: nests built of painted boards held together by drawn nails or far off planets. The physical form and its accompanying exterior become a mirror for internal thought processes and turmoil. in an optimistic twist, her newest work focuses on her nostalgic love of ice cream.
Working in acrylic, collage, spray paint, pencil, pen and ink, and gold leaf, the experimental, yet classically grounded works live somewhat comfortably in a space between graphic expression, stylized representation, surrealism, and sketch. The patina of age and calligraphic drawing methods lend further depth to her story-filled worlds.
Kelly Tunstall (born 1979) received her BA from California College of Arts and Crafts in 2002 and currently resides in San Francisco, CA. 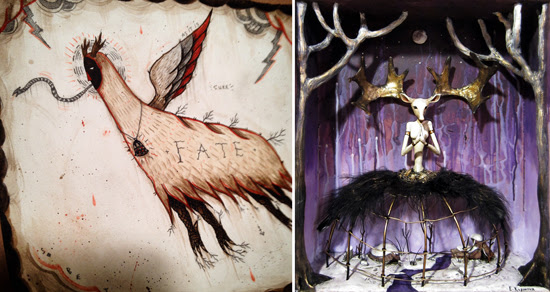 Artist Couple Brandan Styles and Ellie Rusinova will be creating a site specific installation of new works based on mysticism, circus performers, and an ongoing curiosity with all that is unknown in the universe. Both artists utilize layered wood and sculpted elements that defy time and space in various theatrical stages.
Brandan Styles is a self-made mad man, circus aficionado and an art obsessive. He pours all of his energy into creating magical, bizarre, funny and thoughtful art with the goal of expressing the thoughts and characters that inhabit his brain.
Ellie Rusinova is a multicultural artist, mixing history, heritage, dreams and ideas into a world of her own.
Ellie Rusinova and Brandan Styles are a husband and wife team, working on art and life together in Denver,CO with their two kids and 4 dogs. They also run a circus show, travel the country selling art, and love getting into spirited conversations.

“Soft Serve” and “Gods and Fools” opens Friday March 4th, from 6-9 pm with a reception for the artists (open to the public).

The opening reception will be on March 4th from 6-9 pm
and all artists will be in attendance.

Soft Serve and Gods and Fools will remain on display until March 27th.